Even though U.K. Jobless Claims are projected to increase another 4.5K in April, stronger wage growth may spark a bullish reaction in GBP/USD as it puts greater pressure on the Bank of England (BoE) to normalize monetary policy sooner rather than later.

The BoE looks poised to retain its current policy ahead of the U.K. Referendum on June 23, but the central bank may show a greater willingness to remove the record-low interest rate over the coming months as Governor Mark Carney and Co. remain adamant that the next move will be to implement higher borrow-costs.

Easing business outputs accompanied by the slowdown in household consumption may drag on the labor market, and a dismal employment report may undermine the near-term rebound in GBP/USD as it dampens interest-rate expectations.

Nevertheless, the pickup in private-sector lending paired with signs of a stronger-than-expected report may boost job/wage growth in the U.K., and a positive development may spark a bullish reaction in the sterling as market participants pull up bets for a BoE rate-hike. 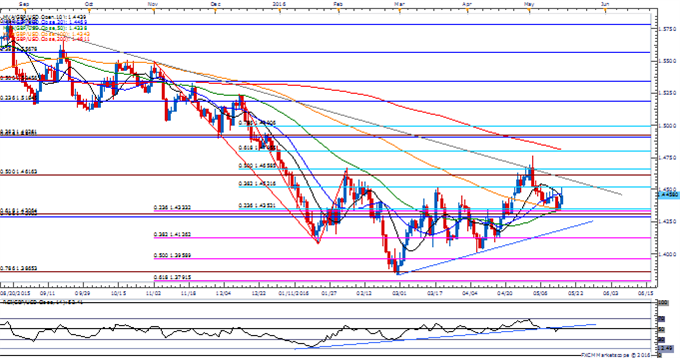 U.K. Jobless Claims unexpectedly increased 6.7K in March after contracting a revised 9.3K the month prior, while the Unemployment Rate under the International Labour Organization’s (ILO) methodology held steady at an annualized 5.1% for the fourth consecutive month in February. Moreover, Average Weekly Earnings excluding bonuses grew an annualized 2.2% in February amid forecasts for a 2.1% print, and signs of stronger price growth may push the Bank of England (BoE) to adopt a more hawkish tone over the coming months as Governor Mark Carney and Co. see a risk of overshooting the 2% inflation-target over the policy horizon. Despite the uptick in jobless claims, GBP/USD climbed above the 1.4400 handle during the European trade, but the advance was short-lived as the pair ended the day at 1.4327.