- U.S. Advance Retail Sales to Increase for Second-Time in 2016.

- Core Sales to Rise for Third Consecutive Month in April.

A 0.8% rebound in U.S. Advance Retail Sales may boost the appeal of the greenback and spur a near-term decline in EUR/USD as it puts increased pressure on the Federal Open Market Committee (FOMC) to implement higher borrowing-costs.

A meaningful pickup in private-sector spending may encourage the Fed to normalize monetary policy sooner rather than later as it remains one of the leading drivers of growth and inflation.

Stronger wage growth accompanied by the expansion in private-sector lending may spur a better-than-expected sales report, and a positive development may trigger a bullish reaction in the U.S. dollar as it boosts interest-rate expectations.

However, the slowdown in job growth paired with signs of a slowing recovery may drag on household spending, and another unexpected decline in retail sales may drag on the greenback as market participants push out bets for a Fed rate-hike. 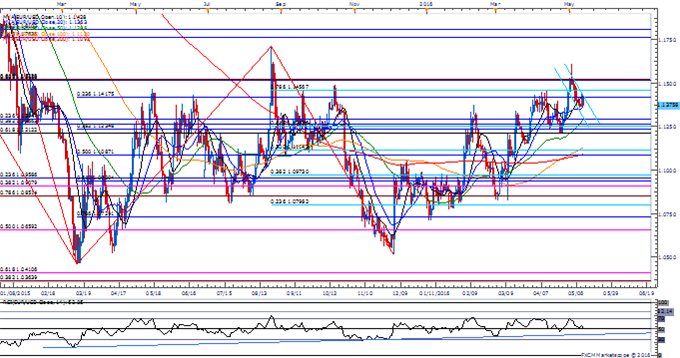 Impact that the U.S. Advance Retail Sales report has had on EUR/USD during the previous month

U.S. Retail Sales missed market expectations in March, with household spending unexpectedly contracting 0.3% after increasing a revised 0.2% the month prior. A deeper look at the report showed demand for motor vehicle & parts slipped 2.1% to lead the decline, with discretionary spending on clothing falling 0.9%, while sales of building materials increased another 1.4% in March. The greenback lost ground following the weaker-than-expected report, with EUR/USD coming off of the 1.1250 region to end the day at 1.1271.