- Will Signs of Stick Inflation Spur a Dissent Within the Monetary Policy Committee (MPC)?

Even though the Bank of England (BoE) is widely anticipated to retain its current policy in May, a downward revision in the central bank’s growth and inflation forecast may dampen the appeal of the British Pound and spur a bearish reaction in GBP/USD as it drags on interest-rate expectations.

Indeed, Governor Mark Carney may continue to argue that the next move will be to normalize monetary policy, but the central bank may sound increasingly cautious this time around as the U.K. Referendum clouds the economic outlook for the region.

Waning job growth accompanied by the slowdown in private-sector consumption may prompt the Monetary Policy Committee (MPC) to trim its growth and inflation forecast, and a meaningful downward revision may drag on sterling as market participants further push out bets for a BoE rate-hike.

Nevertheless, sticky inflation paired signs of stronger wage growth may spur a dissent within the MPC, and a split vote to retain the current policy may generate a bullish reaction in the British Pound as it puts increased pressure on the BoE to normalize monetary policy sooner rather than later. 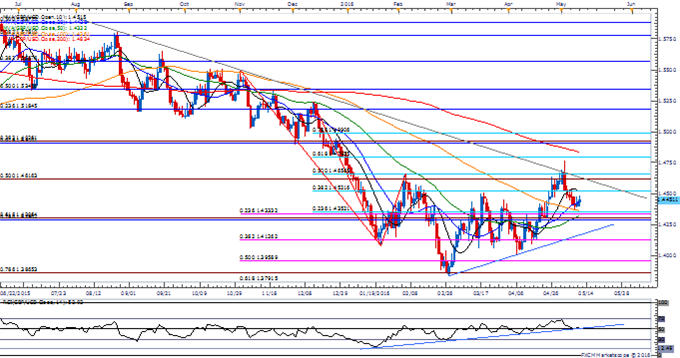 The Bank of England (BoE) once again voted unanimously to keep the benchmark interest rate at the record-low of 0.50%, while retaining its asset-purchase program at GBP 375B. Moreover, the BoE warned of below-target inflation over the short-run even as growth remains ‘steady,’ and largely argued that the recent depreciation in the sterling amid the ‘uncertainty surrounding the forthcoming referendum on the United Kingdom’s membership of the European Union.’ Nevertheless, the British Pound edged higher following the rate decision as the central bank continued to suggest that the next move will be to normalize monetary policy, with GBP/USD ending the day at 1.4150.