- U.K. Industrial & Manufacturing Production to Increase for Second-Time in 2016.

- Will the BoE Stay on Course to Normalize Monetary Policy?

A rebound in U.K. Industrial & Manufacturing Production may boost the economic outlook for the U.K. economy and spur a near-term rebound in GBP/USD as it raises the scope for a stronger-than-expected recovery.

Beyond the looming U.K. Referendum in June, positive data prints coming out of the region may put increased pressure on the Bank of England (BoE) to normalize monetary policy sooner rather than later as central bank officials see a risk of overshooting the 2% inflation target over the policy horizon.

The pickup in private-sector credit accompanied by signs of a stronger-than-expected recovery may encourage U.K. firms to boost production, and a positive development may spark a bullish reaction in the sterling as it highlights an improved outlook for growth and inflation.

However, waning demand from home and abroad may drag on business outputs, and an unexpected contraction in industrial & manufacturing production may drag on the British Pound as it gives the BoE greater scope to retain the record-low interest rate for an extended period of time. 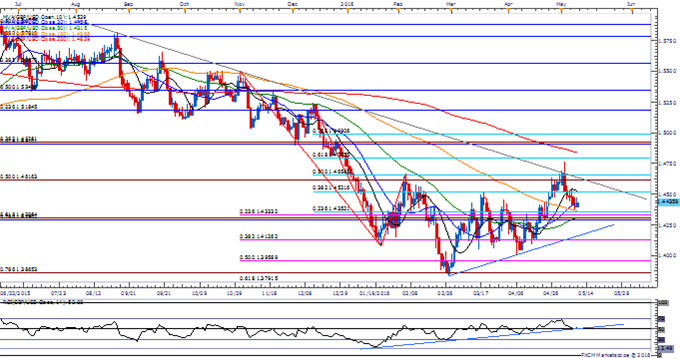 Check out theshort-term technical levels that matter for GBP/USD heading into the report!

Impact that the U.K. Industrial & Manufacturing Report has had on GBP during the last release

Industrial and Manufacturing Production in the U.K. both weakened in February, with outputs contracting 0.3% and 1.1%, respectively following the expansion in the first month of 2016. As the U.K. Referendum clouds the economic outlook for the region, the threat of an EU-exit accompanied by fears of a slower recovery may encourage the Bank of England (BoE) to retain a wait-and-see approach throughout the first-half of 2016 in an effort to mitigate the downside risks surrounding the real economy. Nevertheless, the market reaction was short-lived, with GBP/USD largely retracing the decline to 1.4050 to end the day at 1.4120.