- Will Governor Glenn Stevens Attempt to Talk-Down the Australia Dollar?

According to an updated Bloomberg News survey, 15 of the 27 economists polled forecast the Reserve Bank of Australia (RBA) to keep the benchmark interest rate unchanged at 2.00% in May, but AUD/USD may struggle to hold its ground should the central bank make an increased effort to talk-down the local currency.

Even though the RBA largely retains a wait-and-see approach, central bank Governor Glenn Stevens may toughen the verbal intervention on the Australian dollar in an effort to further assist with the rebalancing of the real economy.

Signs of a stronger-than-expected recover accompanied by the ongoing improvement in the labor market may keep the RBA on the sidelines, and more of the same from Governor Stevens and Co. may boost the appeal of the Australian dollar as market participants curb bets for lower borrowing-costs.

Nevertheless, easing price growth paired with slowing demand from home and abroad may push the RBA to implement additional monetary support, and AUD/USD may largely give back the advance from earlier this year should the central bank adopt a more dovish tone for monetary policy. 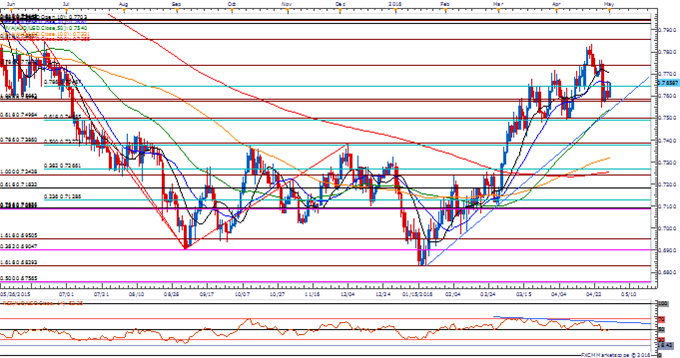 As expected, the Reserve Bank of Australia (RBA) left the official cash rate unchanged at 2.00% in April, with the central bank warning that ‘continued low inflation would provide scope for easier policy, should that be appropriate to lend support to demand.’ Moreover, the RBA argued that ‘an appreciating exchange rate could complicate the adjustment under way in the economy,’ and Governor Glenn Stevens may make an greater attempt to talk-down the local currency in an effort to mitigate the downside risk for growth and inflation. The initial market reaction was short-lived, with AUD/USD pulling back from a high of 0.7630 to end the day at 0.7540.