- Core Rate of Inflation to Slow to Annualized 0.9%.

A downtick in the Euro-Zone’s Gross Domestic Product (GDP) accompanied by signs of weaker price growth may undermine the near-term advance in EUR/USD as it fuels speculation for additional monetary support.

Why Is This Event Important:Even though the European Central Bank (ECB) sticks to its current policy in April, fears of a slowing recovery may push the Governing Council to further embark on its easing cycle in 2016 as President Mario Draghi and Co. struggle to achieve their 2% target for inflation.

Waning business outputs paired with the slowdown in global growth may generate a dismal GDP report, and a marked slowdown in the growth rate may dampen the appeal of the single-currency as market participants boost bets for additional ECB support.

Nevertheless, the pickup in household spending along with the ongoing expansion in private-sector lending may foster a better-than-expected growth figure, and a positive development may prompt the Governing Council to carry a wait-and-see approach into the second-half of the year as the economic outlook improves. 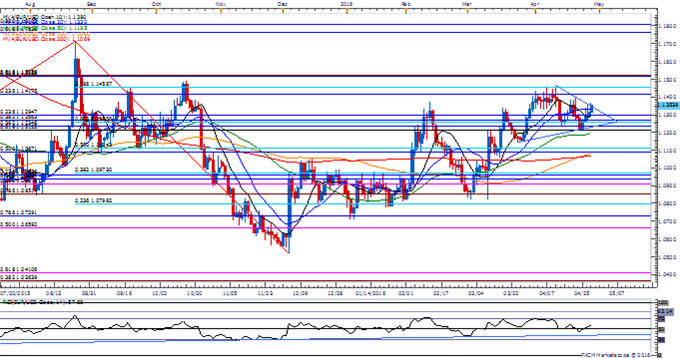 The Euro-Zone’s 4Q Gross Domestic Product (GDP) report showed the growth rate slowed to an annualized 1.5% after expanding 1.6% during the three-months through September, while a separate survey revealed a 1.0% contraction in Industrial Production during December amid forecasts for a 0.3% increase. Indeed, signs of a slowing recovery may encourage the European Central Bank (ECB) to further embark on its easing cycle in 2016 as the Governing Council struggles to achieve its one and only mandate for price stability. EUR/USD struggled to hold its ground despite the in-line print, with the exchange rate extending the decline during the North American trade to end the day at 1.1248.

SPX500 Technical Analysis: Higher-Low Ahead of US Earnings

AUD/USD – Will the Real Trend Please Stand Up?