Even though the Reserve Bank of New Zealand (RBNZ) is anticipated to keep the benchmark interest rate on hold at 2.25%, fresh comments from Governor Graeme Wheeler may derail the NZD/USD advance from earlier this year should the central bank head show a greater willingness to implement lower borrowing-costs.

Why Is This Event Important:At the same time, the RBNZ may toughen the verbal intervention on the local currency as the central bank prefers a weaker exchange rate, and the New Zealand dollar may struggle to hold its ground should the central bank highlight a more dovish tilt for monetary policy.

Waning confidence paired with the slowdown in business outputs may encourage the RBNZ to further embark on its easing cycle in 2016, and market participants may boost bets for another interest-rate cut should the central bank sound increasingly cautious this time around.

However, signs of a more robust recovery accompanied by the pickup in price growth may prompt Governor Wheeler to adopt a more balanced outlook for monetary policy, and a less-dovish policy statement may spur a bullish reaction in the New Zealand dollar as market participants scale back bets for lower borrowing-costs. 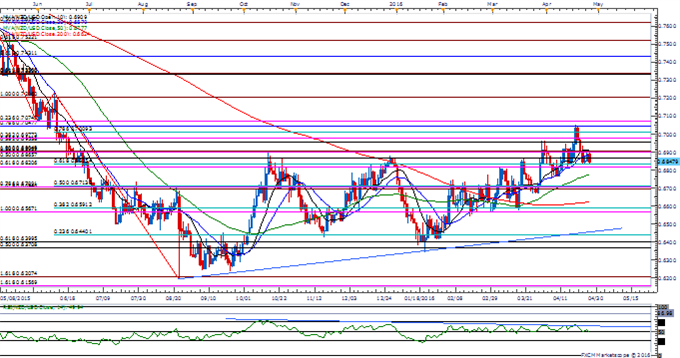 The Reserve Bank of New Zealand (RBNZ) unexpectedly cut the official cash rate by 25bp in March to 2.25%, with the central bank toughen the verbal intervention on the local currency as ‘the trade-weighted exchange rate is more than 4 percent higher than projected in December.’ As a result, the RBNZ argued that ‘a decline would be appropriate given the weakness in export prices,’ with Governor Graeme Wheeler leaving the door open to implement lower borrowing-costs in order to ‘ensure that future average inflation settles near the middle of the target range.’ The surprise rate-cut dragged on the exchange rate, with NZD/USD slipping below the 0.6700 handle to end the day at 0.6664.