- Will Others Join Esther George to Dissent Against the Majority?

The Federal Open Market Committee (FOMC) is widely expected to retain its current policy in April even as central banks officials project two rate-hikes for 2016, but a growing dissent within the central bank may trigger a near-term selloff in EUR/USD as it boosts interest-rate expectations.

Why Is This Event Important:Even though Fed Chair Janet Yellen remains largely concerned about the ‘external risks’ surrounding the region,

a growing number of Fed officials may look to further normalize monetary policy in the first-half of 2016 especially as the U.S. economy approaches ‘full-employment.’

The pickup in private-sector lending accompanied by the ongoing improvement in labor market dynamics may encourage an increased number of Fed officials to favor a higher borrowing-costs, and a greater rift within the committee may prop up the greenback as it fuels bets for a rate-hike at the next quarterly meeting in June.

However, easing confidence along with the slowdown in household spending may dampen Fed expectations for a ‘consumer-led’ recovery, and more of the same from the central bank may drag on the dollar as market participants push out bets for the next Fed rate-hike. 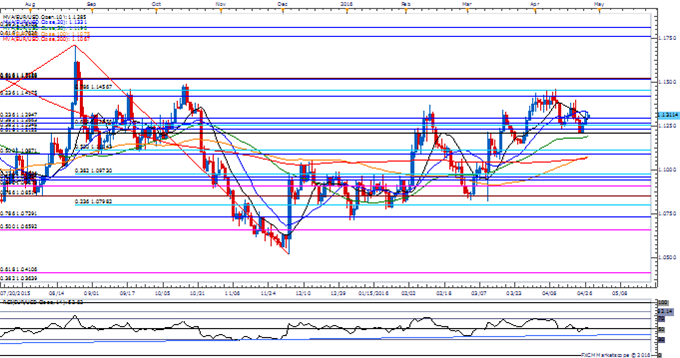 The Federal Open Market Committee (FOMC) voted 9 to 1 to retain the current policy in March, with Kansas City Fed President Esther George dissenting against the majority for a 25bp rate-hike. Moreover, Fed officials scaled back their interest-rate outlook as most officials saw scope for two rate-hikes in 2016, while the central bank also curbed its projection for growth and inflation amid the external factors clouding the economic outlook. The greenback sold off following the more dovish tone for monetary policy, with EUR/USE climbing above the 1.1200 handle to end the day at 1.1222.