- Will Slower Consumption Prompt the BoE to Adopt a Dovish Outlook for Monetary Policy?

Another contraction in U.K. Retail Sales may dampen the appeal of the British Pound and drag on GBP/USD as signs of a slowing recovery provides the Bank of England (BoE) with increased scope to retain the record-low interest rate throughout the near to medium-term.

Even though BoE warns that the next policy move will be to normalize monetary policy, the Monetary Policy Committee (MPC) may stick to the sidelines ahead of the U.K. Referendum in June, and the central bank may look to carry its accommodative policy stance into 2017 amid the uncertainty surrounding the economic outlook.

Slowing job growth accompanied by the pickup in consumer prices may drag on household spending, and a marked decline in retail sales may spark a bearish reaction in the sterling as it weighs on interest-rate expectations.

However, sticky wage growth paired with hopes for a stronger recovery may boost private-sector consumption, and a rebound in retail spending may put increased pressure on the BoE to normalize policy sooner rather than later as Governor Mark Carney sees a risk of overshooting the 2% inflation-target over the policy horizon. 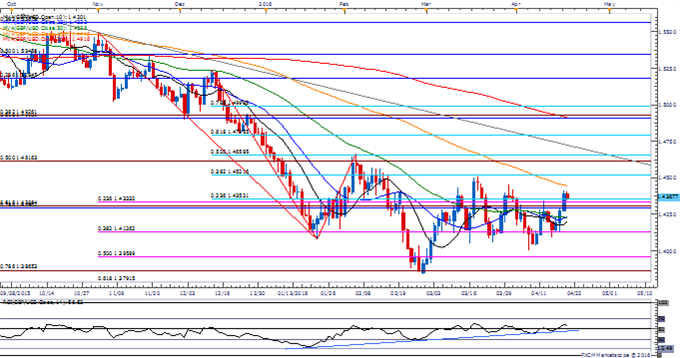 Impact that the U.K. Retail Sales Report has had on GBP during the last release

U.K. Retail Sales continued to beat market expectations in February, with household spending contracting 0.2% after advancing 2.3% the month prior. A deeper look at the report showed discretionary spending for clothing & footwear slipped 0.4%, while demand for household goods increased another 1.4% after rising 3.3% in January. The initial market reaction was short-lived, with GBP/USD gaining ground during the day to end the session at 1.4147.