The European Central Bank (ECB) interest rate decision may spur a limited market reaction following the meaningful easing packaged announced at the March 10 meeting, but further details surrounding the implementation on the non-standard measures may drag on EUR/USD as the Governing Council keeps the door open to further embark on its easing cycle.

Why Is This Event Important:Even though ECB President Mario Draghi appears to have unintentionally put a floor on interest rates, a more aggressive dovish pledge to push monetary policy further into uncharted territory may dampen the appeal of the single-currency and spur a larger pullback in EUR/USD.

Easing confidence accompanied by the slowdown in global growth may encourage the Governing Council to dig deeper into their tool chest, and a greater willingness to enlist more non-standard measures may spark a bearish reaction in EUR/USD amid the deviating paths for monetary policy.

Nevertheless, signs of sticky price growth paired with the expansion in private-sector lending may prompt the ECB to endorse a wait-and-see approach, and more of the same from President Draghi and Co. may prop up the single-currency as market participants scale back bets for additional monetary support. 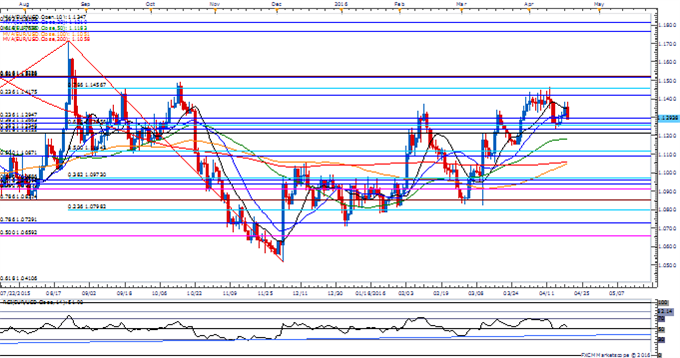 The European Central Bank (ECB) took further steps to insulate the monetary union in March, with the Governor Council unexpectedly lowering the benchmark interest rate to zero, while pushing the deposit rate down to -0.40% from -0.30%. In addition, the ECB expanding its asset-purchase program to EUR80B a month along with plans to introduce another Long-Term Refinance Operation (LTRO) that will begin in June 2016. However, ECB President Mario Draghi appears to have unintentionally put a floor on interest rates as the central bank head warned about implementing lower borrowing-costs. In turn, the selloff in EUR/USD following the initial announcement was short-lived, with the exchange rate snapping back during the press conference to end the day 1.1176.