Despite expectations for another 10.0K decline in U.K. Jobless Claims, a slowdown in household earnings may undermine the near-term advance in GBP/USD as it drags on interest-rate expectations.

Even though the Bank of England (BoE) remains upbeat on the U.K. economy, signs of weak wage growth may encourage Governor Mark Carney to retain the record-low interest rate throughout 2016 as the central bank struggles to achieve its 2% target for inflation.

Signs of a stronger-than-expected recovery accompanied by the pickup in business sentiment may boost job/wage growth, and a positive development may heighten the appeal of the sterling as it puts pressure on the BoE to normalize monetary policy sooner rather than later.

Nevertheless, the slowdown in global growth paired with easing outputs may drag on the labor market, and a dismal employment report may drag on the exchange rate as market participants push out bets for a BoE rate-hike. 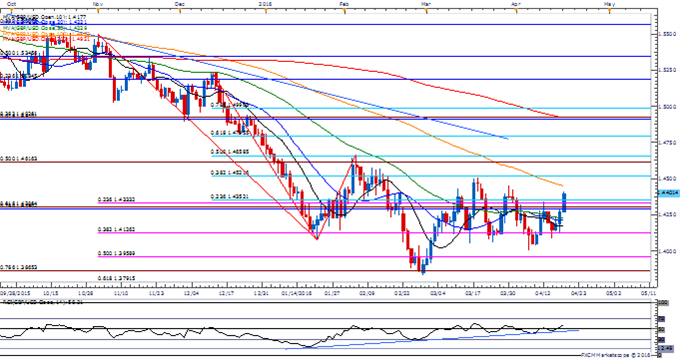 U.K. Jobless Claims slipped another 18.0K in February following a revised 28.4K contraction the month prior, while the Unemployment Rate under the International Labour Organization’s methodology head steady at an annualized 5.1% for the third-consecutive month in January. Moreover, household earnings also beat market expectations as Average Weekly Earnings excluding bonuses climbed to an annualized 2.2% from 2.0% during the same period. Even though the Bank of England (BoE) is widely anticipated to retain its current policy ahead of the U.K. Referendum in June, the ongoing improvement in the labor market may put increased pressure on the central bank to normalize monetary policy sooner rather than later as Governor Mark Carney sees a risk of overshooting the 2% inflation target over the policy horizon. The uptick in GBP/USD as short-lived, with the exchange consolidating ahead of the Fed’s March 16 interest rate decision, but the pair ended the day at 1.4255 as Chair Janet Yellen and Co. scaled back their interest-rate forecast.