Another uptick in the U.K. Consumer Price Index (CPI) accompanied by a pickup in the core rate of inflation may boost the appeal of the sterling and spur a larger rebound in GBP/USD as it puts increased pressure on the Bank of England (BoE) to normalize monetary policy sooner rather than later.

Even though the Monetary Policy Committee (MPC) is widely expected to preserve the record-low interest rate ahead of the U.K. Referendum in June, heightening price pressures may prompt Governor Mark Carney to adopt a more hawkish tone over the coming months as the BoE sees a risk of overshooting the 2% inflation-target over the policy horizon.

Improved confidence accompanied by signs of a stronger-than-expected recovery may boost consumer prices, and a marked uptick in the headline as well as the core rate of inflation may spur a bullish reaction in the British Pound as it boosts interest-rate expectations.

Nevertheless, U.K. firms may increase their efforts to draw domestic demand amid the slowdown in private-sector lending accompanied by the weakening outlook for the global economy, and a soft inflation report may spur a near-term selloff in the sterling as market participants push out bets for a BoE rate-hike.How

To Trade This Event Risk(Video) 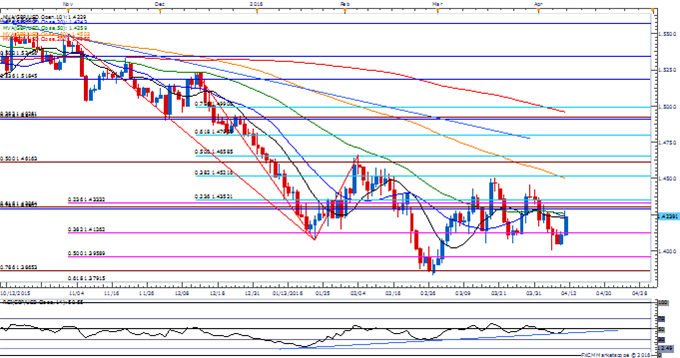 The U.K. Consumer Price Index (CPI) unexpectedly held steady at an annualized 0.3% in February, while the core rate of inflation increased 1.2% for the second-consecutive month during the same period. Even though the Bank of England (BoE) sees a ‘solid’ recovery, subdued price growth may keep the central bank on the sidelines throughout the first-half of 2016 especially as the U.K. Referendum clouds the economic outlook for the region. The initial market reaction was largely mixed, with GBP/USD falling back from the 1.4300 handle to end the day at 1.4204.