- Canada Employment to Increase for First Time in 2016.

- Jobless Rate to Hold Steady at Annualized 7.3% for Second Month

A 10.0K rebound in Canada Employment may spur a bullish reaction in the Canadian dollar and generate a near-term pullback in USD/CAD as it increases the Bank of Canada’s (BoC) scope to move away from its easing-cycle.

A marked pickup in job growth may encourage BoC Governor Stephen Poloz to adopt an improved outlook for the region especially as Prime Minister Justin Trudeau implements fiscal support to further assist with the rebalancing of the real economy.

The pickup in private-sector consumption accompanied by signs of a stronger-than-expected recovery may lead to a significant expansion in employment, and a positive development may boost the appeal of the Canadian dollar as market participants scale back bets for a BoC rate-cut.

However, the slowdown in global trade may prompt Canadian firms to scale back on hiring, and a dismal print may produce near-term headwinds for the loonie as it fuels market speculation for additional monetary support. 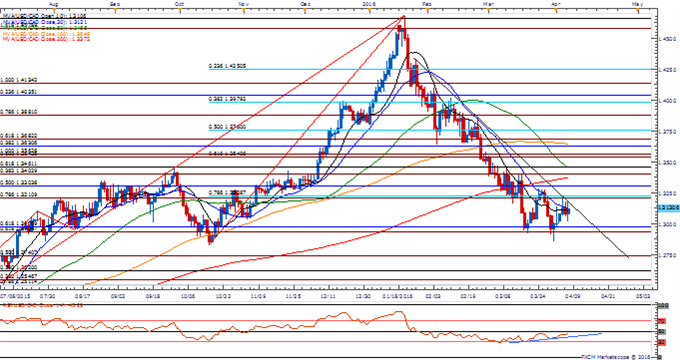 Check out theshort-term technical levels that matter for USD/CAD heading into the report!

Canada unexpectedly shed 2.3K jobs in February, with the jobless rate advanced to an annualized 7.3% from 7.2% the month prior even as the Participation Rate held steady at 65.9% for the third consecutive-month. A deeper look at the report showed a 51.8K decline in full-time positions, which was partly offset by a 49.5K rise in part-time employment. The weaker-than-expected data prints may encourage the Bank of Canada (BoC) to further assist with the rebalancing of the real economy, but Governor Stephen Poloz may largely endorse a wait-and-see approach throughout 2016 as the new government pushes through a fiscal stimulus package. Nevertheless, the market reaction was short-lived, with USD/CAD slipping back below the 1.3300 handle to end the day at 1.3215.