- Will the Bank of Canada (BoC) Move Away From Its Easing Cycle?

A rebound in Canada’s Ivey Purchasing Manager Index (PMI) may boost the appeal of the loonie and spark a near-term pullback in USD/CAD as highlights an improved outlook for the Canadian economy.

A meaningful pickup in business spending may prompt BoC Governor Stephen Poloz to adopt a hawkish tone for monetary policy, and the central bank may show a greater willingness to move away from its easing cycle following the ‘insurance’ rate-cuts from 2015.

Signs of a stronger-than-expected recovery accompanied by easing factory-gate prices may encourage Canadian firms to spending, and a positive development may generate a bullish reaction in the loonie as market participants scale back bets for additional monetary support.

However, subdued confidence paired with the slowdown in global trade may drag on private-sector activity, and a dismal PMI print may spur a further advance in USD/CAD as it fuels speculation for lower borrowing-costs. 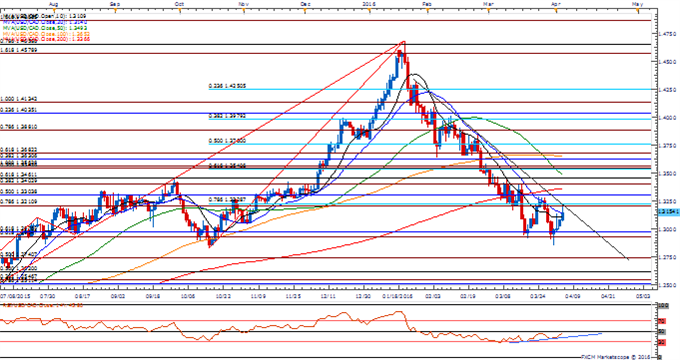 Check out the short-term technical levels that matter for CAD/JPY heading into the report!

Canada’s Ivey Purchasing Manager Index (PMI) narrowed more-than-expected in February, with the figure slowing to 53.4 from 66.0 the month prior. A deeper look at the report showed the gauge for inventories contracting for the first time since October, while the Employment component slipped to 50.3 from 55.1 in January. The marked slowdown may encourage the Bank of Canada (BoC) to retain a cautious outlook for the region, but the central bank may scale back its willingness to further reduce the benchmark interest rate in 2016 as Prime Minister Justin Trudeau pledges to implement fiscal support to assist with the rebalancing of the real economy. USD/CAD edged higher following the dismal print, but the market reaction was short-lived, with the pair slipping back below the 1.3400 handle to end the day at 1.3310.