Another 205K expansion in Non-Farm Payrolls (NFP) may heighten the appeal of the greenback and spur a near-term pullback in EUR/USD as it puts increased pressure on the Federal Open Market Committee (FOMC) to further normalize monetary.

However, market participants may pay increased attention to Average Hourly Earnings as the U.S. economy approaches ‘full-employment,’ and the ongoing weakness in private-sector wages may push the committee to further delay the normalization cycle as central bank officials highlight the downward tilt in inflation expectations.

Signs of a stronger-than-expected recovery accompanied by the pickup in private-sector spending may encourage U.S. firms to expand their labor force, and a marked expansion in job/wage growth may boost interest-rate expectations as Fed officials project two rate-hikes for 2016.

Nevertheless, waning business confidence paired with the rise in planned job-cuts may drag on labor market dynamics, and the dollar may face further losses over the near-term should the NFP report dampen the outlook for growth and inflation. 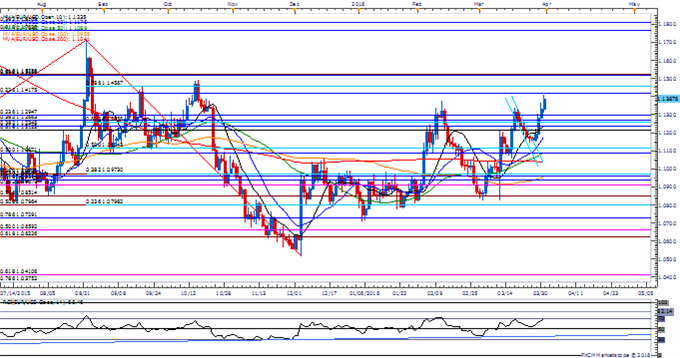 Check out the short-term technical levels that matter for USDOLLAR heading into the report!

U.S. Non-Farm Payrolls (NFP) increased another 242K in February following a revised 172K expansion the month prior, while the jobless rate held steady at an annualized 4.9% for the second consecutive month. Moreover, the Labor Force Participation Rate climbed to 62.9% amid forecasts for a 62.8% print, while Average Weekly Earnings unexpectedly slowed to an annualized 2.2% from 2.5% in January to mark the slowest pace of growth since July. Despite the ongoing improvement in the labor market, the weakness in household earnings may encourage the Federal Reserve to further delay its normalization cycle as the central bank looks for a ‘consumer-led’ recovery in 2016. Despite the initial advance in the greenback, the market reaction was short-lived, with EUR/USD bouncing back from 1.0902 to end the day at the 1.1000 handle.