- Core Rate of Inflation to Hold Steady at Annualized 1.2% for Second Straight Month.

Another uptick in the U.K. Consumer Price Index (CPI) accompanied by stickiness in the core-rate of inflation may generate a near-term rebound in GBP/USD as it puts increased pressure on the Bank of England (BoE) to normalize monetary policy sooner rather than later.

The BoE looks poised to retain its current policy ahead of the U.K. Referendum in June as the Monetary Policy Committee (MPC) remains unanimous in keeping the benchmark interest rate at the record-low, but signs of stronger price growth may encourage Governor Mark Carney to adopt a more hawkish tone over the coming months as the central bank sees a risk of overshooting the 2% inflation-target over the policy horizon.

Stronger wage growth along with the pickup in household spending may encourage U.K. firms to boost consumer prices, and a stronger-than-expected CPI report may spur a bullish reaction in the British Pound as it boosts interest-rate expectations.

Nevertheless, waning confidence paired with fears surrounding the U.K. Referendum may drag on inflation, and signs of easing price growth may produce near-term headwinds for the sterling as market participants push out bets for a BoE rate-hike. 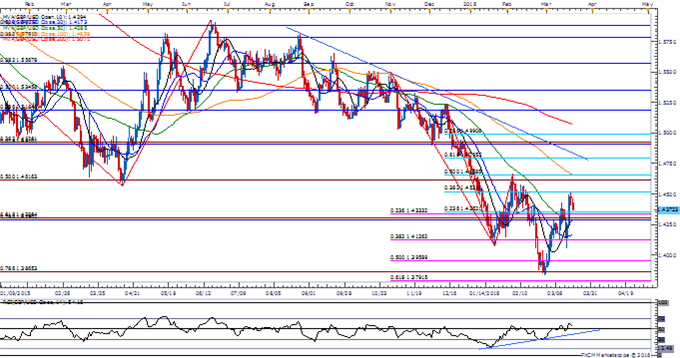 The U.K. Consumer Price Index (CPI) increased an annualized 0.3% in January to match market forecast, while the core rate of inflation unexpectedly slowed to 1.2% from 1.4% in December amid forecasts for a 1.3% print. Subdued price pressures may encourage the Bank of England (BoE) to endorse a wait-and-see approach throughout the first-half of 2016 especially as the U.K. Referendum continues to cloud out economic outlook for the region. Despite the initial move higher, the sterling lost ground following the release, with GBP/USD sliding below the 1.4400 handle to close the day at 1.4301.

US Dollar – Breakdown Continues, Reprieve Ahead?