- Core Rate of Inflation to Hold at 2.0% for Second Straight Month.

Despite forecasts for a marked slowdown in Canada’s Consumer Price Index (CPI), stickiness in the core rate of inflation may encourage the Bank of Canada (BoC) to move away from its easing cycle following the ‘insurance’ rate-cuts in 2015.

Signs of stable price growth may prompt the BoC to adopt a more hawkish tone for monetary policy as the risks surrounding the region appear to be ‘roughly-balanced,’ and Governor Stephen Poloz may change his tune over the coming months especially as Prime Minister Justin Trudeau pledges to support the economy with fiscal stimulus.

The unexpected pickup in economic activity accompanied by rising factory-gate prices may encourage Canadian firms to boost consumer prices, and a stronger-than-expected CPI report may spur a further decline in USD/CAD as it boosts interest-rate expectations.

However, easing job growth paired with the slowdown in private-sector consumption may drag on price growth, and a dismal development may spur a bearish reaction in the Canadian dollar as it fuels speculation for additional monetary support. 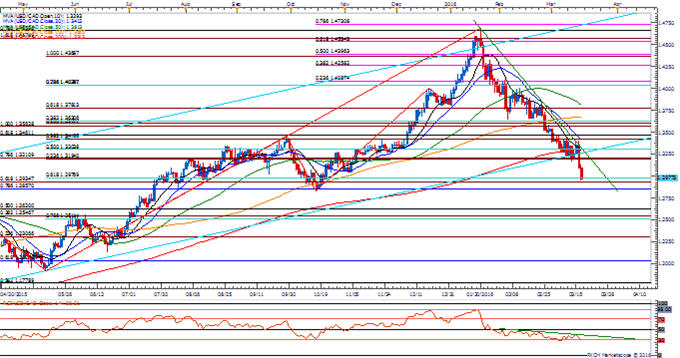 Check out theshort-term technical levels that matter for USD/CAD heading into the report!

Canada’s Consumer Price Index (CPI) unexpectedly jumped to an annualized 2.0% in January from 1.6% the month prior, with the core rate of inflation also outpacing market expectations as the figure advanced to 2.0% amid forecasts for a 1.9% print. A deeper look at the report showed a further decline in energy prices paired with another round of discounting for Clothing & Footwear, while food costs climbed 1.5%, with prices for Alcohol & Tobacco advancing 0.7% during the same period. Despite a slow progress in energy price growth, it seems the Bank of Canada (BoC) will retain a neutral tone for an extended period of time before any major change in the market. Despite the stronger-than-expected print, the U.S. CPI release overshadowed the Canadian data print, with USD/CAD climbing to a daily high of 1.3846.

US Dollar – Breakdown Continues, Reprieve Ahead?