- Will the Fed’s Updated Forecast Fuel Speculation for Rate-Hikes in 2016?

Even though the Federal Open Market Committee (FOMC) is widely expected to retain its current policy in March, the updated forecasts for growth, inflation and the interest rate may instill a bullish outlook for the U.S. dollar should the central bank stay on course to implement higher borrowing-costs in 2016.

Why Is This Event Important:The FOMC may continue to prepare U.S. households and businesses for higher interest rates especially as the economy approaches ‘full-employment,’ and the central bank may sound more hawkish this time around as Chair Janet Yellen remains confident in achieving the 2% inflation-target over the policy horizon.

The ongoing improvement in labor-market dynamics accompanied by signs of a stronger-than-expected recovery may encourage the FOMC to further normalize monetary policy in 2016, and the fresh batch of central bank rhetoric may heighten the appeal of the greenback should Fed officials endorse an upbeat outlook for the U.S. economy.

However, waning confidence paired with subdued wage growth may prompt to Fed to adopt a more cautious tone this time around, and the dollar stands at risk of facing near-term headwinds should the central bank show a greater willingness to further delay the normalization cycle.

Bullish USD Trade: FOMC to Stay on Course to Further Normalize Policy in 2016 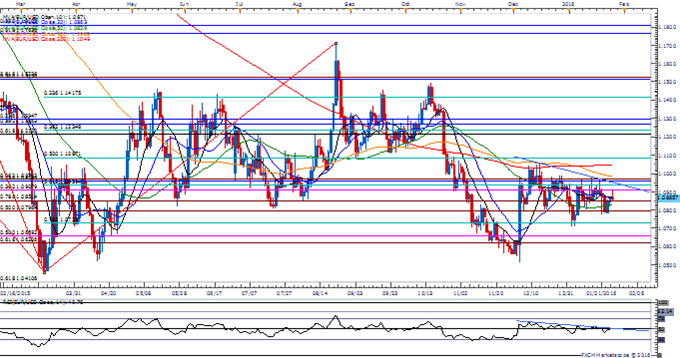 Check out the short-term technical levels that matter for USDOLLLAR heading into the Fed meeting!

The Federal Open Market Committee (FOMC) stuck to its current policy and kept the benchmark rate unchanged at 0.50% following the rate-hike in December. After raising borrowing-costs for the first time since 2006, the Fed may continue to normalize monetary policy over the coming months as the economy approaches ‘full-employment,’ while Chair Janet Yellen anticipates a ‘consumer-led’ recovery in 2016. The market reaction to the interest rate decision was largely mixed as the central bank adopts wait-and-see approach, with EUR/USD struggling to hold above the 1.0900 handle as the pair ended the day at 1.0892.