- Australia Employment to Increase for First Time Since November.

- Jobless Rate to Hold at Annualized 6.0% for Second Consecutive Month.

A 13.5K rebound in Australia Employment may prop up the Australian dollar and spark a near-term advance in AUD/USD as it provides the Reserve Bank of Australia (RBA) with greater scope to retain its current policy throughout 2016.

Even though Governor Glenn Stevens keeps the door open to further support the real economy, positive developments coming out of the region may encourage the RBA to endorse a wait-and-see approach over the coming months as the central bank sees a ‘moderate’ recovery in the first-quarter of this year.

Improved confidence accompanied by signs of a stronger-than-expected recovery may foster a marked rebound in job growth, and a positive development may heighten the appeal of the Australia dollar as it dampens bets for a rate-cut.

However, the slowdown in private-sector lending paired with the ongoing rebalancing in the real economy may drag on job growth, and another unexpected decline in employment may drag on the exchange rate as it fuels speculation for additional monetary support. 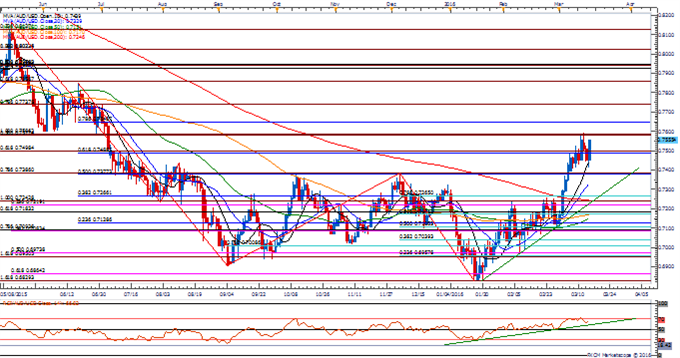 Australia’s employment unexpectedlyfell another 7.9K in January following a revised 0.9K contracted the month prior. At the same time, the unemployment unexpectedly climbed back to 6.0% from 5.8% during the same period even as the participation rate held steady at 65.2%. As a result, a further slowdown in job growth may put increased pressure on the Reserve Bank of Australia (RBA) to further assist with the rebalancing of the real economy as Governor Glenn Stevens keeps the door open to implement additional rate-cuts. The initial bearish market reactionwas short-lived, with AUD/USD largely consolidating throughout the Asian/Pacific trade as the pair ended the session at 0.7142.

S&P 500, DAX 40 and ASX 200 Fundamental Forecast for the Week Ahead
Advertisement