Another 9.1K decline in U.K. Jobless Claims paired with signs of stronger wage growth may heighten the appeal of the British Pound and spur a near-term advance in GBP/USD as it puts increased pressure on the Bank of England (BoE) to normalize monetary policy sooner rather than later.

Even though the EU referendum clouds the economic outlook for the U.K., a further improvement in labor-market dynamics may spur a split within the Bank of England (BoE) as central bank officials remain upbeat on the economy and see a risk of overshooting the 2% inflation-target over the policy horizon.

Improved demand from home and abroad may encourage U.K. firms to ramp up their labor force, and a marked pickup in job/wage growth may spark a near-term advance in Cable as it boosts interest-rate expectations.

Nevertheless, waning confidence along with the slowdown in service-based activity may drag on employment, and a dismal labor report may produce near-term headwinds for the sterling as it market participants push out bets for a BoE rate-hike. 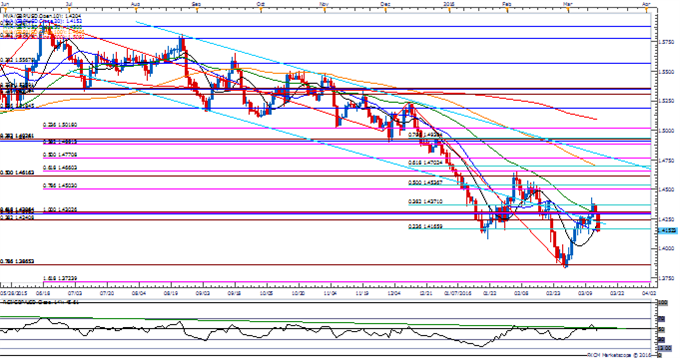 Check out theshort-term technical levels that matter for GBP/USD heading into the key events!

The U.K. labor report beat market expectations in January, with Jobless Claims contracting another 14.8K, while the International Labor Organization’s (ILO) gauge for unemployment heldsteady at an annualized 5.1% during the three-months through December. At the same time, the headline reading for U.K.wage growth slowed to annualized 1.9% from a revised 2.1% in November to mark the lowest reading since February 2015, while Average Weekly Earnings excluding bonuses unexpectedly climbed 2.0% during the same period amid forecasts for a 1.8% print. Despite the ongoing improvement in the labor market, the Bank of England may continue to delay its normalization cycle as the EU referendum clouds the economic outlook for the U.K. The sterling snapped back following the better-than-expected prints, with GBP/USD climbing above the 1.4300 handle, but the market reaction was short-lived as the pair closed the day at 1.4286.