According to a Bloomberg News survey, all of the 27 economists polled forecast the Reserve Bank of Australia (RBA) to keep the benchmark interest rate on hold at 2.00%, but the fresh comments coming out of the central bank may spark a bearish reaction in the Australian dollar should Governor Glenn Stevens and Co. toughen the verbal intervention on the local currency.

More of the same from the RBA may spark a lackluster reaction as Governor Stevens continues to endorse a wait-and-see approach, but the central bank may increase its efforts to talk-down the local currency in order to further assist with the rebalancing of the real economy.

The RBA may stick to the sidelines throughout 2016 as inflation expectations remain largely anchored, and bright signs coming out of the region may encourage Governor Stevens to adopt a more neutral outlook for monetary policy as the previous rate-cuts work their way through the real economy.

However, the slowdown in private-sector earnings may prompt the RBA to further insulate economy, and a greater willingness to implement additional monetary support may dampen the appeal of the higher-yielding currency as interest rate expectations deteriorate. 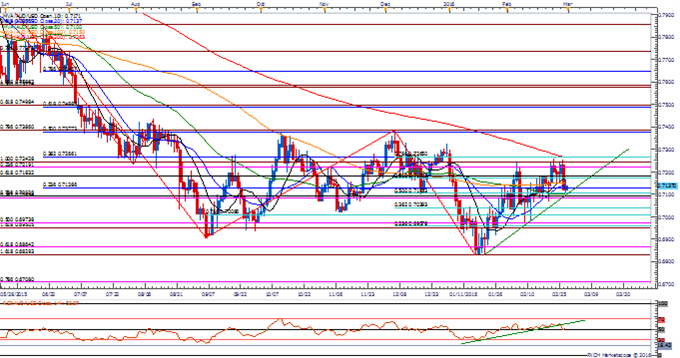 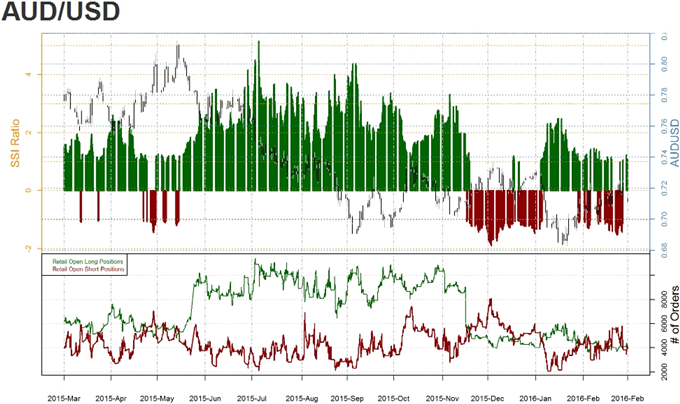 Even though the Reserve Bank of Australia (RBA) kept the cash rate on hold at 2.00%, Governor Glenn Stevens and Co. left the door open to further support the real economy as the central bank anticipates ‘below-average’ growth over the policy horizon. As a result, signs of a slowing recovery may push the RBA to further embark on its easing cycle as China – Australia’s largest trading partner – faces a growing risk for a ‘hard-landing.’ The initial market reaction was short-lived, with AUD/USD struggling to hold above the 0.7100 handle as the pair ended the Asia/Pacific trade at 0.7079.

Dollar Breakout Searches for Resistance Ahead of NFPs