The Euro-Zone’s 4Q Gross Domestic Product (GDP) report may produce near-term headwinds for the Euro as signs of a slowing recovery puts increased pressure on the European Central Bank (ECB) to further embark on its easing cycle at the March 10 meeting.

Why Is This Event Important:The ECB may enlist more non-standard measures to further insulate the monetary union amid the disinflationary environment across the major industrialized economies, and President Mario Draghi may continue to push monetary policy into unchartered territory in an effort to achieve the central bank’s one and only mandate for price stability.

Waning confidence accompanied by the slowdown in private-sector lending may drag on the growth rate, and a dismal 4Q GDP report may dampen the appeal of the single currency as it boosts bets for additional monetary support.

Nevertheless, improved demand from home & abroad may encourage a stronger-than-expected GDP print, and signs of a more robust recovery may prompt the Governing Council to endorse a wait-and-see approach in March amid the bright signs coming out of the economy. 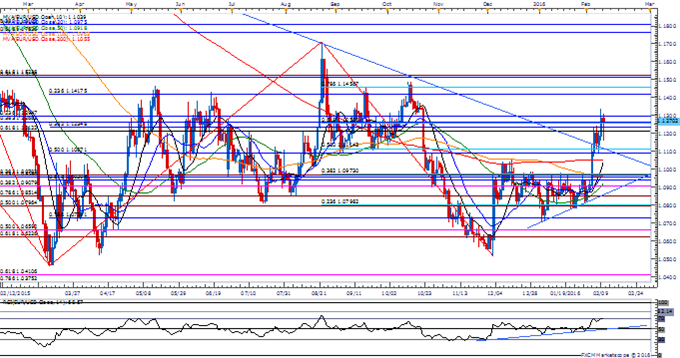 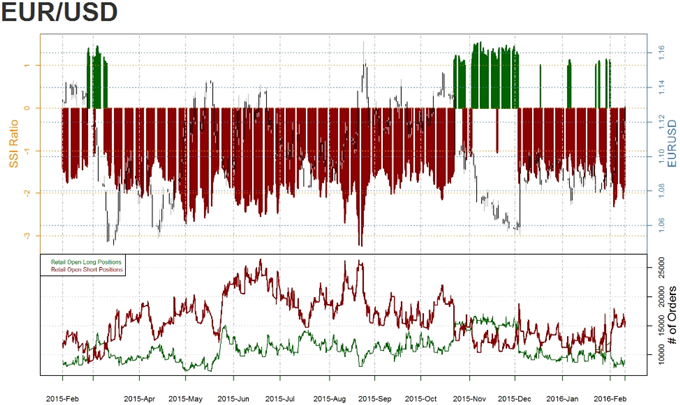 The DailyFX Speculative Sentiment Index (SSI) shows retail crowd remains net-short EUR/USD since February 1, but the ratio remains off of recent extremes as it narrows to -1.71, with 37% of traders now long.

The Euro-Zone’s 3Q Gross Domestic Product (GDP) report fell short of market expectations, with the economy growing another annualized 1.6% during the three-months through September. Despite the fastest pace of growth since 2011, the European Central Bank (ECB) looks poised to further embark on its easing cycle over the coming months as President Mario Draghi keeps the door open to implement more non-standard measures. Nevertheless, the Euro bounced back from the session lows following the limited market reaction, with EUR/USD climbing to the 1.0800 region ahead of the North American session.

EUR/USD Bullish Interpretation is Valid While above 1.1050