- U.S. Non-Farm Payrolls (NFP) to Expand Below 200K for First Time Since September.

- Average Hourly Earnings to Slow to Annualized 2.2% From 2.5% in December.

Another 190K expansion in Non-Farm Payrolls (NFP) may boost the appeal of the greenback as the U.S. economy approaches ‘full-employment,’ but a marked slowdown in wage growth may fuel the near-term rally in EUR/USD as it dampens bets for a Fed rate-hike in the first-half of 2016.

Even though the Federal Open Market Committee (FOMC) appears to be on course to implement higher borrowing-costs over the coming months, the disinflationary environment across the major industrialized economies may keep the Fed on the sidelines for most of the year as central bank officials look for greater evidence of achieving the 2% target for price growth.

The pickup in business confidence accompanied by the expansion in the housing market may encourage a stronger-than-expected NFP report, and a further improvement in the labor market may put increased pressure on the Fed to implement a higher interest rate especially as the region heads towards the natural rate of unemployment.

However, the persistent slack in private-sector consumption paired with the rise in planned job-cuts may drag on employment, and a soft labor report along with a marked slowdown in wage growth may spark a further depreciation in the dollar as market participants push out bets for the next Fed rate-hike. 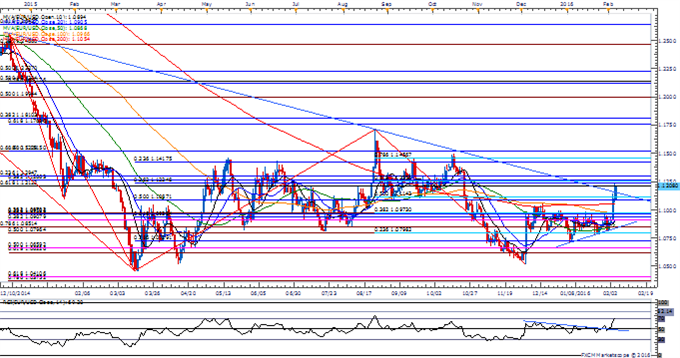 The U.S. Non-Farm Payrolls report largely exceeded the estimate in December, with the economy adding another 292K, following a revised 252K expansion the month prior. Moreover, the Unemployment Rate held steady at an annualized 5.0% even though the Labor Force Participation Rate unexpectedly increased to 62.6% from 62.5%, while Average Hourly Earnings fell short of market expectations as the figure climbed 2.5% amid projections for a 2.7% print. Nevertheless, the ongoing improvement in the labor market may keep the Fed on course to further normalize monetary policy in 2016 especially as the U.S. economy approaches ‘full-employment.’ Despite the better-than-expected prints, the initial bullish reaction in the greenback was short-lived, with EUR/USD grinding higher throughout the North American session to close the day at 1.0918.

USD/JPY-Don’t Forget about the 26 Year Trendline