The Bank of England (BoE) interest rate decision is likely to reveal another 8 to 1 split as the central bank remains in no rush to normalize monetary policy, but the updated forecasts may heighten the appeal of the sterling and fuel a larger recovery in GBP/USD should the central bank highlight a greater risk of overshooting the 2% inflation target over the policy horizon.

Even though Governor Mark Carney largely endorses a wait-and-see approach, an upward revision in the BoE’s economic projections may boost interest rate expectations as central bank officials remain upbeat on the U.K. economy and prepare households/businesses for higher borrowing-costs.

The BoE may make an attempt to buy more time amid the ongoing slack in the real economy, and more of the same from the Monetary Policy Committee (MPC) accompanied by concerns of a slower recovery may reinforce a long-term bearish outlook for Cable as Governor Carney and Co. lags behind their U.S. counterpart.

Nevertheless, signs of sticky price growth paired with the pickup in private-sector lending may push the BoE to drop its dovish tone, and the fresh updated coming out of the central bank may spur a larger recovery in the British Pound should the central bank show a greater willingness to implement a rate-hike in 2016. 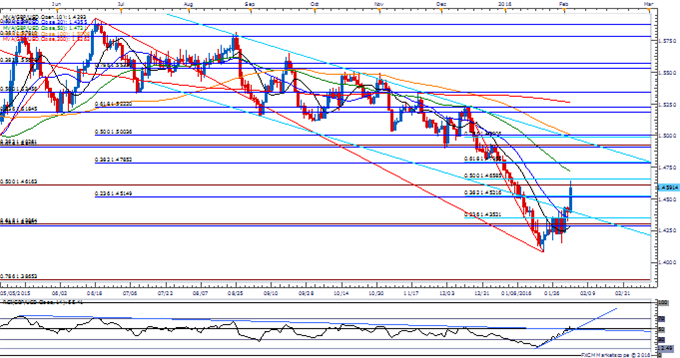 As expected, the Bank of England (BoE) retained its current policy at its first meeting for 2016, with the Monetary Policy Committee (MPC) once again voting 8 to 1 to keep the benchmark interest rate on hold at 0.50%. Even though the BoE continues to highlight the bright signs coming out of the U.K. economy, persistent low energy prices may become a growing concern for Governor Mark Carney and Co. as the central bank now expects a more gradual increase in inflation that previously expected. There was a limited market reaction as we got more of the same from the BoE, but the sterling bounced back during the North American trade to end the day at 1.5229.

USD/JPY-Don’t Forget about the 26 Year Trendline