A slowdown in the ISM Non-Manufacturing survey may produce headwinds for the greenback and spur a near-term rally in EUR/USD as fears of a slowing recovery dampens bets for a Fed rate-hike in the first-half of 2016.

Even though the Federal Open Market Committee (FOMC) appears to be on course to implement higher borrowing-costs, mixed data prints coming out of the U.S. may encourage the central bank to endorse a wait-and-see approach at the March 16 interest rate decision as the ongoing slack on the real economy undermines the Fed’s scope to achieve its 2% inflation target over the policy horizon.

The ISM survey may highlight a marked slowdown in service-based activity as households scale back on spending, and a dismal development may drag on interest rate expectations as the FOMC remains ‘data dependent.’

Nevertheless, improved confidence accompanied by the pickup in the housing market may generate pickup in private-sector activity, and a stronger-than-expected ISM print may boost the appeal of the greenback as it reinforces Fed expectations for a consumption-driven recovery in 2016. 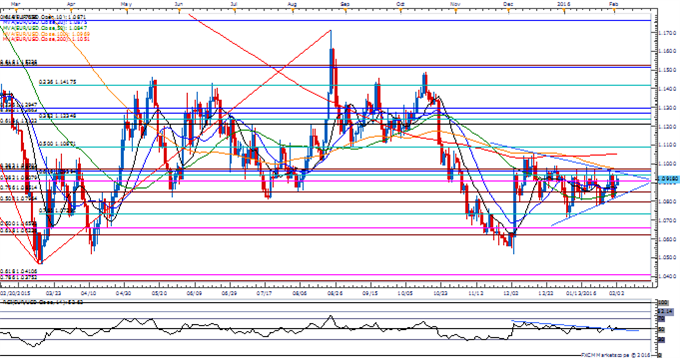 The U.S. ISM Non-Manufacturing survey missed market expectations, with the figure slipping to 55.3 in December from a revised 56.6 the month prior to mark the lowest reading since May 2014. Despite the weaker-than-expect print, a deeper look at the report showed a rebound in New Export Orders paired with a pickup in New Orders, while the Employment component advance to 55.7 from 55.0 in November. Signs of a slowing recovery may encourage the Federal Reserve to largely endorse a wait-and-see approach in the first-half of 2016, but the central bank may stay on course to implement higher borrowing-costs over the coming months as Chair Janet Yellen remains upbeat on the economy. The bearish reaction in the greenback was short-lived, with EUR/USD struggling to hold above the 1.1950 region as it closed the day at 1.1888.