- Will Stronger GDP Spur Larger Dissent Within the Bank of England (BoE)?

The U.K.’s Gross Domestic Product (GDP) report may renew the bearish sentiment surround Cable and spur a near-term decline in GBP/USD should the data dampen bets for Bank of England (BoE) rate-hike in 2016.

Even though the BoE remains upbeat on the economy, signs of a softer-than-expected recovery may encourage the central bank to retain its current policy throughout 2015 as it seems as though Governor Mark Carney remains in no rush to lift the benchmark interest rate off of the record-low.

Slowing outputs accompanied by weak consumption may drag on the growth rate, and a dismal GDP print may produce additional headwinds for the sterling as market participants push back bets for a BoE rate-hike.

Nevertheless, the ongoing improvement in the labor market paired with the expansion in private-sector credit may have helped to boost economic activity in the U.K., and a positive development may generate a larger recovery in GBP/USD as it puts increased pressure on the Monetary Policy Committee (MPC) to normalize policy sooner rather than later. 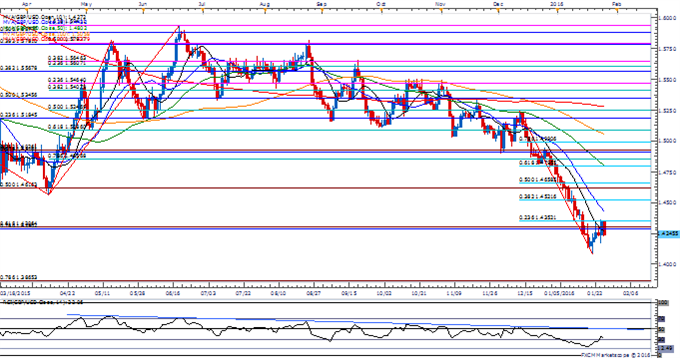 The 3Q U.K. Gross Domestic Product (GDP) fell short of market expectations, with the growth rate increased an annualized 2.3% after expanding 2.5% during the three-months through June. Even though the Bank of England (BoE) prepares U.K. households and businesses for higher borrowing-costs, the slower-than-expected recovery may encourage Governor Mark Carney to further delay its normalization cycle as the Monetary Policy Committee (MPC) continues to highlight the downside risks to the inflation outlook. The initial reaction to the release was short-lived, with GBP/USD largely consolidating throughout the North American trade as the pair closed the day at 1.5299.