EUR/USD Stuck in Tight Range Ahead of ECB; Short-Squeeze on Tap?

- Will ECB President Mario Draghi Wait Until the March Meeting to Adjust Policy?

Despite the ongoing easing cycle in the euro-area, the fresh rhetoric coming out of the European Central Bank (ECB) may spur a similar market reaction to the December interest rate decision as the Governing Council takes a more cautious approach in pushing monetary policy into uncharted territory.

Why Is This Event Important:The deviating paths for monetary policy continues to encourage a long-term bearish outlook for EUR/USD especially as the Federal Reserve pledges to implement higher borrowing-costs in 2016 but, the single-currency may face another short squeeze should President Mario Draghi endorse a wait-and-see approach for the first-half of 2016.

Waning outputs accompanied by the disinflationary environment across the euro-area may push the ECB to defy market expectations, and the euro-dollar stands at risk of resuming the downward trend should the Governing Council take additional steps to insulate the monetary union.

Nevertheless, bright signs coming out of the real economy may push the ECB to the sidelines, and the Euro may face a similar reaction to the December rate decision should the central bank scale back its willingness to implement more non-standard measures. 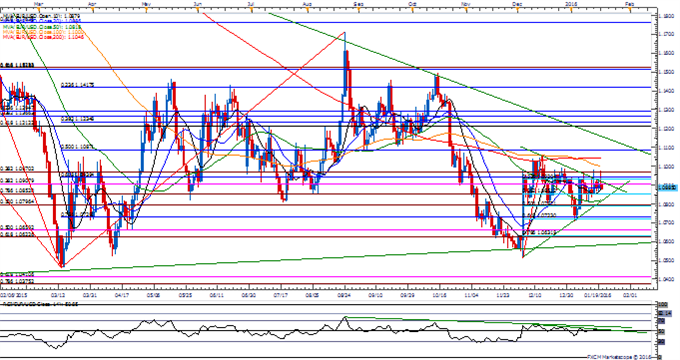 The European Central Bank (ECB) took additional steps to insulate the monetary union, with the Governing Council reducing the deposit rate to -0.3% from -0.2%, while extending the asset-purchase program to March 2017. The ECB also broadened the scope of its quantitative easing (QE) program, with the central bank to include local and regional debt in its non-standard measure. The disinflationary environment across the major industrialized economies may push the ECB to further embark on its easing cycle in 2016 as the council struggles to achieve its one and only mandate for price stability. Despite the new measures, the Euro strengthened against its major counterparts as the ECB failed to meet market expectations, with EUR/USD ending the day at 1.0940.