- U.K. Jobless Claims to Increase for Fifth-Consecutive Month in December.

A 2.8K rise in U.K. Jobless Claims accompanied with another slowdown in wage growth may generate fresh 2016 lows in GBP/USD as it raises the Bank of England’s (BoE) scope to further delay its normalization cycle.

The recent comments from BoE Governor Mark Carney suggests that the Monetary Policy Committee (MPC) is in no rush to lift the benchmark interest rate off of the record-low, and the board may continue to endorse a wait-and-see approach at the next policy meeting on February 4 as the central bank head looks for signs of stronger inflation.

Waning business outputs paired with the slowdown in building activity may drag on U.K. job growth, and a dismal employment report may exacerbate the recent sell-off in GBP/USD as market participants continue to push out bets for a BoE rate-hike.

Nevertheless, the pickup in private-sector lending along with the rise in household spending may encourage U.K. firms to expand their labor force, and a positive development may spur a greater dissent within the BoE as central bank officials see a ‘solid’ recovery in the region. 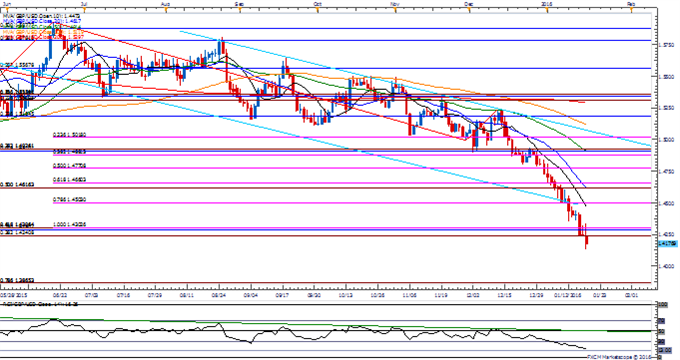 U.K. Jobless Claims increased another 3.9K in November following a revised 0.2K expansion the month prior while the International Labour Organization’s (ILO) gauge for unemployment unexpectedly slipped to a 7-year low of 5.2% during the three-months through October. Nevertheless, wage pressures continued to abate in October as Average Weekly Earnings ex. Bonus slipped to an annualized 2.0% amid forecasts for a 2.3% print. Despite the ongoing improvement in the labor market, easing wage pressures may prompt the Bank of England (BoE) to further delay its normalization cycle amid the external headwinds surrounding the U.K. economy. The market reaction was largely limited even as GBP/USD bounces back from a session low of 1.4983, with the pair closing the day at 1.4999.

Price & Time: GBP/USD: Is this only getting started?