GBP/USD Oversold Ahead of BoE- Will Governor Carney Talk Up Cable?

- Will the BoE Show Concerns About the Recent Depreciation in Sterling?

Even though the Bank of England (BoE) interest rate decision is likely to reveal another 8-1 split within the central bank, the fresh comments may boost the appeal of the sterling and spur a near-term rebound in GBP/USD should the committee change its tune for monetary policy.

The recent selloff in the British Pound exchange rate may spur a wider dissent within the Monetary Policy Committee (MPC) as it raise the risk for imported inflation but, more of the same from the BoE may drag on the exchange rate as Governor Mark Carney appears to be in no rush to normalize policy.

Slowing production paired subdued price/wage growth may push the BoE to endorse a wait-and-see approach throughout the first-half of 2016, and the sterling may face additional headwinds over the coming months should the central bank highlight a cautious outlook for the region.

Nevertheless, the BoE may sound less dovish this time around as the U.K. economy moves closer to full-employment, and the British Pound may face a near-term rebound over the coming days should the committee discuss normalizing monetary policy sooner rather than later. 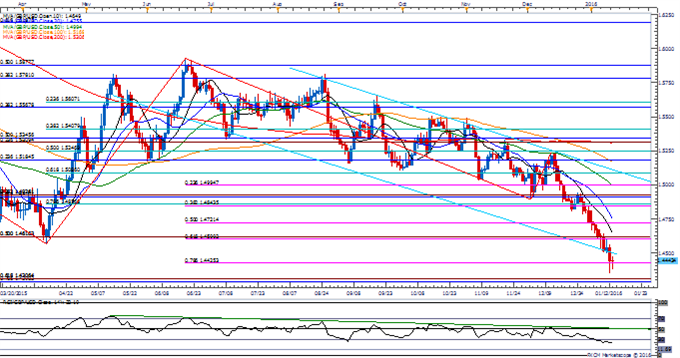 The Bank of England (BoE) interest rate decision yielding another 8 to 1 split, within Ian McCafferty still standing as the lone dissenter as the committee waits for ‘sustained firming in domestic cost pressures’ to start normalizing monetary policy. Even though the Monetary Policy Committee (MPC) sees ‘robust growth’ in the U.K. economy, it seems as though Governor Mark Carney remains in raise the benchmark interest rate off of the record-low as price/wage growth remains largely subdued. The sterling struggled to hold its ground following the BoE rate decision, with GBP/USD slipping below the 1.5150 region but, the pair failed to retain the decline during the North American as it ended the day at 1.5158.

The Pain of Tolerance is Withdrawal: It’s a Different World without QE