Another 200K expansion in Non-Farm Payrolls (NFP) paired with a meaningful pickup in U.S. wage growth may trigger a short-term selloff in EUR/USD as it puts increased pressure on the Federal Open Market Committee (FOMC) to further normalize monetary policy in 2016.

Despite the cautious tone laid out in the Fed Minutes, a further improvement in labor market conditions may encourage the committee to adopt a more hawkish tone at the January 27 interest rate decision as Chair Janet Yellen remains confident in achieving the 2% inflation goal over the policy horizon.

Fed forecasts for a stronger recovery accompanied by the ongoing decline in planned job-cuts may spur a further improvement in the labor market, and a positive employment report may boost the appeal of the greenback and fuel bets for higher borrowing-costs as Fed officials largely retain an upbeat outlook for the region.

However, the slowdown in business outputs along with the persistent weakness in private-sector consumption may drag on job growth, and a dismal NFP print may prompt the FOMC to endorse a wait-and-see approach in an effort to mitigate the downside risk for growth and inflation.

Join DailyFX on Demand for LIVE Coverage of the U.S. Non-Farm Payrolls Report! 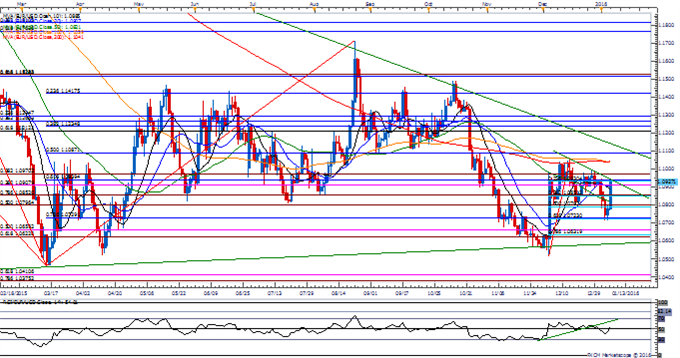 The U.S. economy added another 211K jobs in November following a revised 298K expansion the month prior. The unemployment remained unchanged at an annualized 5.0% even though the participation rate unexpectedly widened to 62.5% from 62.4% in October, while U.S. wage growth fell short of market expectations as Average Hourly Earnings slowed to an annualized rate of 2.3% from 2.5%, the fastest pace of growth since the data series began in 2010. The ongoing improvement in the labor market may put increased pressure on the Fed to layout a more detailed exit strategy over the coming months especially as the U.S. economy approaches ‘full-employment.’ The initial market reaction was short-lived, with EUR/USD bouncing to 1.0950 before ending the session at 1.0874.

Trading Opportunities of 2016: Key Currency Crosses to Watch amid the Diverging Paths for Monetary Policy