- Employment Component Slowed to 55.0 in November from 59.2 the Month Prior.

A pickup in the ISM Non-Manufacturing survey may boost the appeal of the greenback and spur a further decline in EUR/USD as it raises the Federal Reserve’s scope to implement higher borrowing-costs in 2016.

With the U.S. economy approaching full-employment, signs of a stronger recovery may encourage the Federal Open Market Committee (FOMC) to adopt a more hawkish tone over the coming months especially as Chair Janet Yellen anticipates the region to achieve the 2% inflation target over the policy horizon.

Improved confidence accompanied by the expansion in private-sector activity may generate a strong ISM print, and a positive development may spur increased demand for the dollar as it boosts interest rate expectations.

However, the slowdown private-sector lending paired with the ongoing slack in household consumption may drag on service-based activity, and an unexpected dip in the survey may prompt the Fed to endorse a wait-and-see approach at the January 27 interest rate decision as the committee largely looks for evidence of stronger inflation. 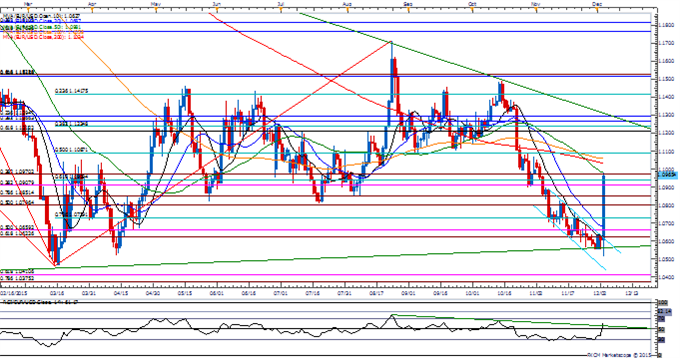 The U.S. ISM Non-Manufacturing survey failed to meet market expectations in November, with the index slipping to a 6-month low of 55.9 from 59.1 the month prior. A deeper look at report a slowdown inNew Orders and New Export Orders along with a downtick in the Employment component, while gauge for Prices Paid expanded for the first time since August. Despite the weaker-than-expected print, the Federal Reserve may continue to prepare U.S. households and businesses for higher borrowing-costs as Chair Janet Yellen remains upbeat on the economy. Nevertheless, the greenback struggled to hold its ground following the release, with EUR/USD rising above the 1.0900 handle and closing the day at 1.0937.

Trading Opportunities of 2016: Key Currency Crosses to Watch amid the Diverging Paths for Monetary Policy