- Will There Be a Unanimous Vote to Implement Higher Borrowing-Costs?

Based on Fed Funds Futures, market participants are pricing a 76% probability for a rate-hike a the Federal Open Market Committee’s (FOMC) December 16 interest rate decision, and the fresh updates coming out of the central bank may instill a bullish U.S. dollar outlook for 2016 should Chair Janet and Co. outline a more detailed exit-strategy.

Why Is This Event Important:Even though the FOMC remains on course to shift gears, a split decision to implement higher borrowing-costs accompanied by a downward revision in the central bank’s updated forecasts may drag on rate expectations, and the dollar stands at risk of facing near-term headwinds over the remainder of the month should the ‘data dependent’ Fed highlight a wait-and-see approach for the year ahead.

With the U.S. economy approaching ‘full-employment,’ Fed officials may sound increasingly upbeat and endorse a more hawkish outlook for monetary policy as Chair Yellen remains confident in achieving the 2% inflation target over the policy horizon.

However, subdued wage growth paired with the ongoing weakness in household consumption may push the FOMC to temper market expectations, and the greenback may struggle to hold its ground should the committee outline a more shallow path for interest rates. 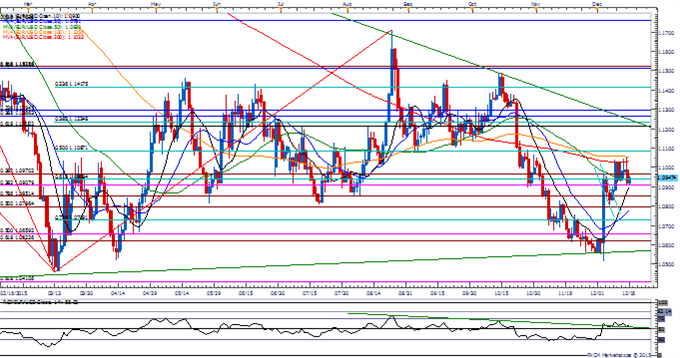 The Federal Open Market Committee (FOMC) once again voted 9-1 to retain its current policy in October, with Richmond Fed President Jeffrey Lacker dissenting against the majority to raise the benchmark interest rate. Nevertheless, it seems as though the Fed may stay on course to remove the zero-interest rate policy (ZIRP) in 2015 as the U.S. economy approaches ‘full-employment,’ while Chair Janet Yellen remains confident in achieving the 2% inflation target over the policy horizon. The greenback strengthened following the rate decision, with EUR/USD dipping below the 1.1000 handle to end the North American trade at 1.0921.

Trade Setups in USD-pairs Ahead of FOMC

US DOLLAR Technical Analysis: The 100-DMA Acts As a Bullish Support