- Household Spending Has Risen Four Out of Last Ten-Months.

Another 0.2% expansion in U.S. Retail Sales may fuel speculation for a December Fed rate-hike and spur a near-term pullback in EUR/USD as central bank officials largely endorse an upbeat outlook for the world’s largest economy.

Signs of stronger consumption may encourage the Federal Open Market Committee (FOMC) to remove the zero-interest rate policy (ZIRP) at the next meeting as it remains one of the leading drivers of growth and inflation but, a weak sales report may drag on rate expectations as Chair Janet Yellen appears to be in no rush to normalize monetary policy.

With the U.S. economy approaching full-employment, a pickup in household spending may encourage the Fed to implement higher borrowing-costs throughout 2016, and a positive development should boost the appeal of the greenback as the central bank gets ready to shift gears.

However, subdued wages accompanied by the slowdown in private credit may drag on sales, and a dismal outcome may prompt the FOMC to lower its interest-rate forecast at the December meeting as it undermines the central bank’s scope to achieve the 2% inflation target over the policy horizon. 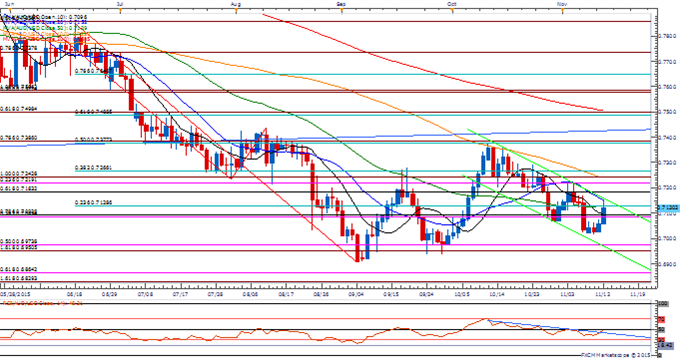 U.S. Retail Sales continued to miss market expectations in October as household spending increased 0.1% after holding flat during the previous month. A deeper look at the report showed waning demand for motor vehicle/parts accompanied by lower gasoline receipts dragged on the print, which was largely offset by increased spending on building material and health/ personal care. Despite the ongoing weakness in private-consumption, it seems as though the Fed will stay on course to raise the benchmark interest rate in 2015 as Chair Janet Yellen sees the central bank on its way to achieve its dual mandate for full-employment and price stability. The initial decline in the greenback was short-lived, with EUR/USD largely consolidating throughout the North American trade as it closed the day at 1.0762.

COT-Small British Pound Traders are Most Short Since April Low

Trade Alongside the DailyFX Team on DailyFX on Demand