The European Central Bank (ECB) interest rate decision may fuel a further decline in EUR/USD amid speculation for additional monetary support but, heavy expectations for a meaningful announcement may ultimately trigger a short-squeeze in the exchange rate should the central bank disappoint.

Why Is This Event Important:Beyond bets for a meaningful adjust to the ECB’s quantitative easing (QE) program, market participants are looking for a further reduction in the central bank’s deposit-rate as the Governing Council struggles to achieve its one and only mandate for price stability. Efforts to further insulate the monetary union may push EUR/USD to give back the advance from the March low (1.0461) amid the deviating paths for monetary policy.

The disinflationary environment accompanied by the weakening outlook for global growth may encourage the Governing Council to enlist more policy tools to shore up the real economy, and the Euro stands at risk of facing additional headwinds in 2016 should the central bank keep the door open to further embark on its easing cycle.

Nevertheless, improved confidence paired with the pickup in lending to small and medium-sized enterprises (SME) may prompt the ECB to take a more patient approach as the non-standard measures work their way through the real economy, and the central bank may opt to easing policy further in 2016 as there appears to be a sustainable recovery taking shape in the monetary union. 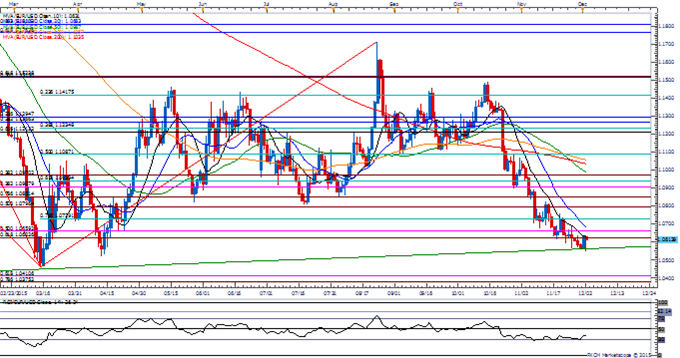 Even though the European Central Bank (ECB) stuck to its current policy in October, the Governing Council showed a greater willingness to further embark on its easing cycle as the central bank opened the door for a further reduction in deposit-rate. As the ECB pledges to re-examine its non-standard measures, the central bank may continue to push monetary policy into uncharted territory in an efforts to further insulate the monetary union . The Euro sold off as the ECB removed the floor on interest rates, with EUR/USD breaking below the 1.1200 handle following the interest rate decision to close the day at 1.1107.