The preliminary U.S. 3Q Gross Domestic Product (GDP) report may heighten the appeal of the greenback and spark fresh monthly lows in EUR/USD as signs of a stronger recovery fuels bets for a December Fed rate-hike.

With the U.S. economy approaching full-employment, a marked upward revision in the growth rate may keep the Federal Open Market Committee (FOMC) on course to remove the zero-interest rate policy (ZIRP) in 2015 as Chair Janet Yellen remains confident in achieving the 2% inflation target over the policy horizon.

The expansion in private-sector credit accompanied by the pickup in housing activity may generate a stronger-than-expected GDP print, and a positive development may spark a bullish reaction in the greenback as it boosts interest rate expectations.

Nevertheless, the ongoing slack in household spending may drag on economic activity as it remains one of the leading drivers of growth, and a lackluster GDP figure may spur another 9-1 split at the Fed’s December 16 interest rate decision as the majority remains appears to be in no rush to normalize monetary policy. 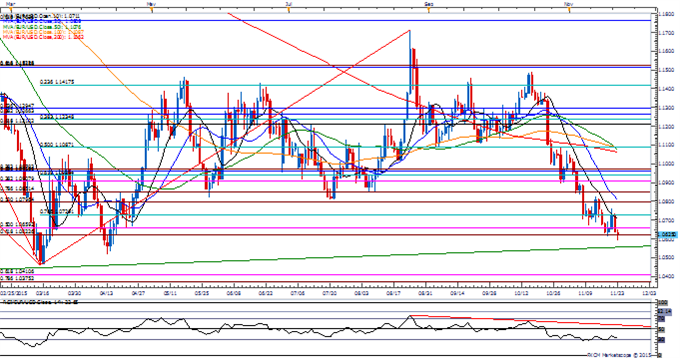 The preliminary 2Q Gross Domestic Product (GDP) report fueled expectations for a faster recovery as the growth rate increased an annualized 3.7% versus an initial forecast for a 2.3% expansion. The pickup in economic activity may encourage the Federal Open Market Committee (FOMC) to normalize monetary in 2015 as Fed Chair Janet Yellen sees the central bank on its way to achieve its dual mandate for full-employment and price stability. The greenback gained ground following the GDP print, with EUR/USD pushing below the 1.1250 region to end the North American session at 1.1242.

Webinar: Dollar Crosses at Key Juncture Ahead of US Holiday