Even though Canada’s Consumer Price Index (CPI) is expected to expand an annualized 1.0% in October, a slowdown in the core rate of inflation may dampen the appeal of the loonie and spur a near-term advance in USD/CAD as it puts increased pressure on the Bank of Canada (BoC) to further insulate the real economy.

With the Canadian economy stuck in a technical recession, signs of easing price growth may encourage BoC Governor Stephen Poloz to adopt a more dovish outlook for monetary policy, and the central bank may have little choice but to implement additional monetary support amid the readjustment in the real economy.

The recent downturn in private-sector consumption may encourage Canadian firms to offer discounted prices, and a softer-than-expected CPI report may spur fresh monthly highs in USD/CAD as it fuels speculation for additional monetary support.

However, Canadian firms may boost consumer prices amid rising input costs accompanied by the ongoing improvement in the labor market, and evidence of sticky inflation may encourage the BoC to turn increasingly upbeat towards the economy as Governor Poloz sees a more sustainable recovery ahead. 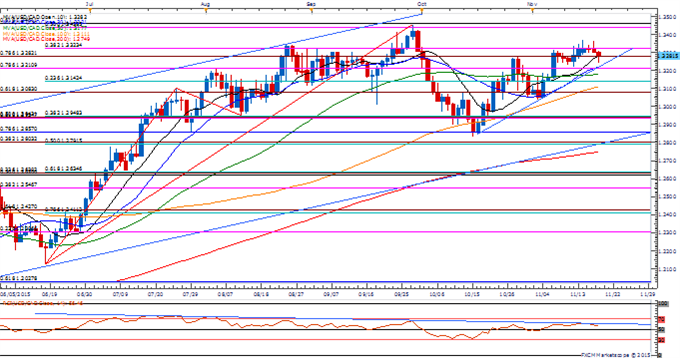 Canada’s Consumer Price Index (CPI) unexpectedly slowed to an annualized rate of 1.0% from 1.3% the month prior, while the core rate of inflation also missed market forecast as the reading held steady at 2.1% amid expectations for a 2.2% print. In turn, the Bank of Canada (BoC) may largely retain a cautious outlook throughout 2015 as the central bank cuts its growth forecasts for the next two years, and Governor Stephen Poloz may look to further insulate the real economy as it slips into a technical recession. The Canadian dollar lost ground following the softer-than-expected CPI prints, with USD/CAD climbing above the 1.3100 handle to end the day at 1.3162.