- Will a Slowdown in Private-Sector Consumption Spur an Ongoing 8-1 Split Within the BoE?

A 0.6% contraction in U.K. Retail Sales may dampen the appeal of the sterling and threaten the range-bound price action in GBP/USD as market participants push out bets for a Bank of England (BoE) rate-hike.

Even though the BoE largely remains on course to normalize monetary policy, it seems as though Governor Mark Carney remains in no rush to implement higher borrowings costs amid the external risks surrounding the U.K. However, signs of stronger consumption may put increased pressure on the Monetary Policy Committee (MPC) to raise the benchmark interest rate off of the record-low as the real economy gets on a firmer footing.

Sticky inflation accompanied by subdued wage growth may weigh on household spending, and a marked decline in U.K. Retail Sales may trigger a bearish reaction in the sterling as it drags on interest rate expectations.

Nevertheless, signs of a stronger recovery paired with the expansion in private-sector credit may have helped to boost consumption, and a stronger-than-expected sales report may spur a larger rebound in GBP/USD as it raises the BoE’s scope to normalize monetary policy sooner rather than later. 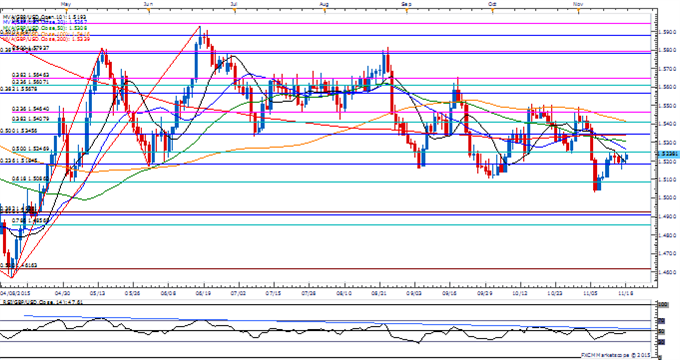 Impact that the U.K. Retail Sales has had on GBP during the last release

The headline reading for U.K. Retail Sales unexpectedly showed a 1.9% jump in September to mark the largest advance since November 2014, while sales excluding auto fuel grew 1.7% amid forecasts for a 0.4% print. The pickup in private-sector consumption, one of the leading drivers of growth for the U.K. economy, may encourage the Bank of England (BoE) to stay on course to normalize monetary policy, but it seems as though Governor Mark Carney remains in no rush to implement higher borrowing-costs amid the external risks surrounding the region. The market reaction in the British Pound was short-lived, with GBP/USD pulling back from the 1.5500 handle to end the North American trade at 1.5392.