- Core Rate of Inflation to Hold Steady at Annualized 1.0% for Third Consecutive Month.

Despite forecasts for another 0.1% in the headline reading of U.K. inflation, stickiness in the core Consumer Price Index (CPI) may improve the appeal of the British Pound and spark a larger rebound in GBP/USD as the Bank of England (BoE) largely stays on course to normalize monetary policy.

Even though the BoE remains in no rush to normalize monetary policy, signs of stronger inflation may spur a greater dissent at the December 10 interest rate decision as central bank officials see a more sustainable recovery in the U.K. However, a weaker-than-expected CPI may encourage the majority of the Monetary Policy Committee (MPC) to retain the highly accommodative stance for an extended period amid the external risks clouding the economic outlook region.

Improved demand from home and abroad may encourage U.K. firms to boost consumer prices, and a stronger-than-expected CPI print may prompt GBP/USD to retrace the decline from earlier this month as it puts increased pressure on the BoE to lift the benchmark interest rate off of the record-low.

However, tepid wage growth accompanied by the recent weakness in private-sector activity may drag on inflation, and an unexpected slowdown in the core CPI may produce near-term headwinds for the sterling as market participants push out bets for a BoE rate-hike. 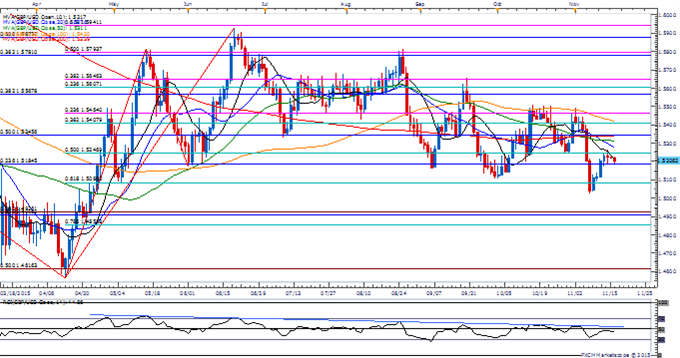 The U.K. Consumer Price Index (CPI) unexpectedly weakened in September, with the headline reading for inflation contracting an annualized -0.1% in September. At the same time, the core rate of inflation fell short of market expectations as the print held steady at an annualized 1.0% for the second consecutive month. Even though the Bank of England (BoE) continues to prepare U.K. households and businesses for higher borrowing-costs, Governor Mark Carney may look to carry the current policy into 2016 in an effort to further insulate the region from external shocks. Despite the limited market reaction to the U.K. CPI print, GBP/USD largely struggled to hold its ground throughout the day as the pair ended the North American trade at 1.5246.

GBP/USD Technical Analysis: The Cable is All Wound Up for Inflation Data