The Euro-Zone’s 3Q Gross Domestic Product (GDP) report may heighten the appeal of the single currency and spur a more meaningful rebound in EUR/USD as the monetary union is expected to expand an annualized 1.7% after growing 1.5% during the three-months through June.

Why Is This Event Important:Even though the European Central Bank (ECB) endorses a dovish outlook for monetary policy, signs of a more sustainable recovery may prompt the Governing Council to stick to its current stance at the December 3 interest rate decision, and the Euro may trade on a firmer footing over the coming days as market participants scale back bets for lower interest rates.

Improved confidence accompanied by increased lending to small and medium-sized enterprises (SME) may generate a meaningful pickup in the growth rate, and a positive development may encourage the ECB to sit on the sidelines throughout the remainder of the year as the non-standard measures continue to work their way through the real economy.

However, the ECB may take further steps to insulate the monetary union amid the slowing demand from home and abroad, and a weaker-than-expected GDP figure may fuel bets for a major announcement in December as Governing Council largely removes the floor on interest rates. 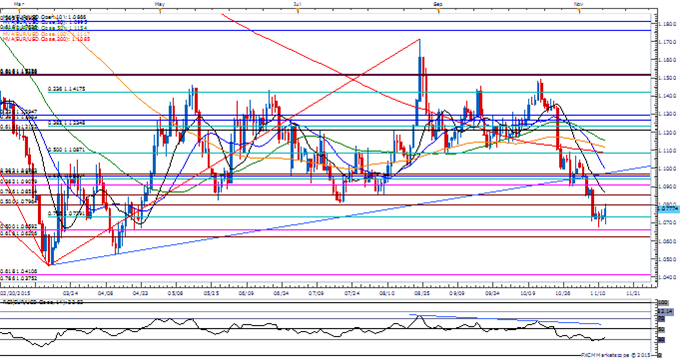 The Euro-Zones 2Q Gross Domestic Product (GDP) report fell short of market expectations as the economy grew an annualized 1.2% in the second quarter after expanding 1.0% during the first three-months of 2014. Despite marking the fastest pace of growth since the fourth-quarter of 2011, the ongoing weakness in the real economy may push the European Central Bank (ECB) to further embark on its easing cycle as it struggles to achieve its one and only mandate for price stability. Nevertheless, the market reaction to the lackluster GDP print was short-lived, with EUR/USD pushing above the 1.1150 region ahead of the North American, but the single-currency struggled to hold its ground as the pair closed the day at 1.1107.

EUR/JPY on the Cusp of Important Move

Price & Time: EUR/USD - To Bounce or Not To Bounce