Another 1.4K expansion in U.K. Jobless Claims accompanied by slower wage growth may spur a bearish reaction in the British Pound and generate fresh monthly lows in GBP/USD as it raises the Bank of England’s (BoE) scope to further delay its normalization cycle.

U.K. data prints pointing to slower growth may drag on interest rate expectations, and BoE Governor Mark Carney may continue to highlight a cautious outlook for the region amid the easing cycle in the euro-area, while its U.S. counterpart stands ready and willing to implement higher borrowing-costs in 2015.

Waning confidence paired with the slowdown in private-sector credit may drag on the labor market, and a dismal employment report may produce near-term headwinds for the sterling as market participants push out bets for a BoE rate-hike.

Nevertheless, improved demand from home and abroad may encourage U.K. firms to boost their work-force, and a positive development may push the Monetary Policy Committee (MPC) to remove the record-low interest rate in 2016 as the central bank sees a growing risk of overshooting the 2% target for inflation. 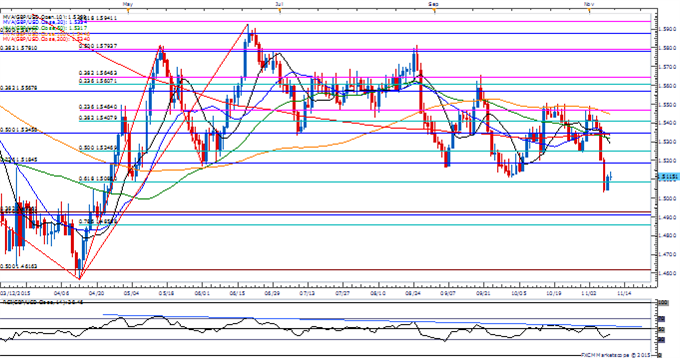 U.K. Jobless Claims unexpectedly increased another 4.6K in September after climbing 1.2K the month prior, while the International Labour Organization’s (ILO) gauge for unemployment slipped to a 7-year low of 5.4% during the three-months through August. Moreover, average weekly earnings cooled to an annualized 2.8% from 2.9% in August, and the slowdown in job/wage growth may push the Bank of England (BoE) to further delay its normalization cycle amid the weakening outlook for global growth. The bearish reaction in GBP/USD was short-lived, with the pound-dollar bouncing from the 1.5300 handle to end the day at 1.5475.

GBP/JPY Technical Analysis: From One Trend to Another