Despite forecasts for an uptick in the jobless rate, another pickup in New Zealand Employment accompanied by a further expansion in the Participation Rate may trigger a near-term rebound in NZD/USD as it limits the Reserve Bank of New Zealand’s (RBNZ) scope to further embark on its easing cycle.

With labor-force participation near record-highs, stronger job growth may keep the RBNZ on the sidelines throughout 2015 as it highlights an improved outlook for growth and inflation.

Improved confidence accompanied by expansion in private-sector activity may stronger-than-expected employment report, and a further improvement in the labor market may heighten the appeal of the kiwi as market participants scale back bets for lower borrowing-costs.

However, efforts to cool the housing market along with the slowdown in global trade may drag on job growth, and a dismal development may push the New Zealand dollar to give back the rebound from back in September as it fuels bets for another RBNZ rate cut.

GBPUSD - Working On A Bottom At Major Support 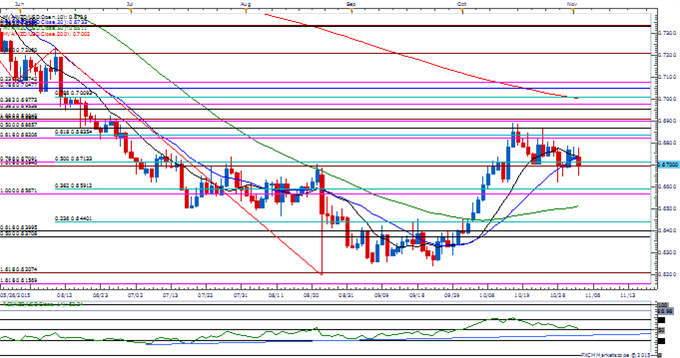 New Zealand Employment merely increased 0.3% during the three-months through June following a revised 0.6% expansion in the first quarter, while the Unemployment Rate climbed to a 12-month high of 5.9% during the same period. The slowdown in job growth may encourage the Reserve Bank of New Zealand (RBNZ) to further embark on its easing cycle as Governor Graeme Wheeler continues to endorse a dovish outlook for monetary policy. The New Zealand dollar struggled following the worse-than-expected prints, with NZD/USD pulling back from the 0.6550 region to close the Asian Pacific trade at 0.6527.