The advance 3Q U.S. Gross Domestic Product (GDP) report may produce near-term headwinds for the greenback and spark a rebound in EUR/USD as the world’s largest economy is expected to grow an annualized 1.5% after expanding 3.9% during the three-months through June.

Slower growth accompanied by a downtick in the core Personal Consumption Expenditure (PCE), the Fed’s preferred gauge for inflation, may encourage the central bank to further delay its normalization cycle, and the bullish sentiment surrounding the dollar may unravel amid the uncertainty surrounding the timing of the Fed liftoff.

The slowdown in private-sector consumption accompanied by waning business outputs may drag on the growth rate, and a weaker-than-expected GDP print may push the Federal Open Market Committee (FOMC) to further delay its normalization cycle in an effort to encourage a stronger recovery.

Nevertheless, improved confidence paired with the ongoing improvement in the housing market may encourage an improved outlook for the region, and a positive development may boost the appeal of the greenback as the Fed remains on course to remove the zero-interest rate policy (ZIRP). 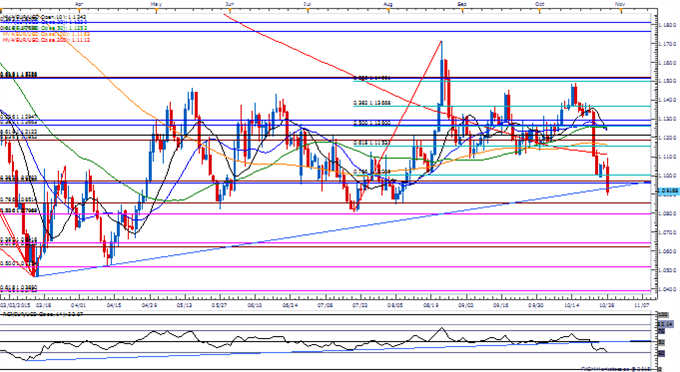 The advance Gross Domestic Product (GDP) showed the U.S. economy expanding at a faster pace in the second-quarter, with the growth rate climbing an annualized 2.3% after expanding a revised 0.6% during the first three-months of 2015. Meanwhile, Personal Consumption and the core Personal Consumption Expenditure (PCE), the Fed’s preferred gauge for inflation, beat market expectations as the figures increased 2.9% and 1.8%, respectively. Despite the weaker-than-expected GDP print, signs of a more sustainable recovery may keep the Fed on course to normalize monetary policy in 2015 as Chair Janet Yellen remains upbeat on the economy. The greenback gained ground following the mixed prints, with EUR/USD working its way towards the 1.0900 handle, but the market reaction was short-lived as the pair ended the at 1.0929.