The European Central Bank (ECB) interest rate decision may trigger a sell-off in EUR/USD amid high expectations for a major announcement, but more of the same from President Mario Draghi and Co. may prop up the single-currency especially as the Governing Council remains in wait-and-see mode.

Even though the ECB stands ready and willing to further embark on its easing cycle, the pickup in private-sector lending suggests that the non-standard measures are having the intended impact, and the central bank may want more time to digest the incoming data as the committee voted unanimously to retain the current policy during the last meeting.

The ECB may show a greater willingness to expand/extend its quantitative easing (QE) program amid the weakening outlook for global growth accompanied by the disinflation environment across the euro-area, and the Euro may continue to give back the advance from earlier this month should the fresh batch of central bank rhetoric point to a more accommodative policy stance.

Nevertheless, the ECB may make another attempt to buy more time as the non-standard measures continue to work their way through the real economy, and the Governing Council may stick to the sidelines throughout the remainder of the year as the central bank’s Outright Monetary Transactions (OMT) helps to boost lending to small and medium-sized enterprises (SME).Join DailyFX on Demand for Coverage of the Entire ECB Rate Decision! 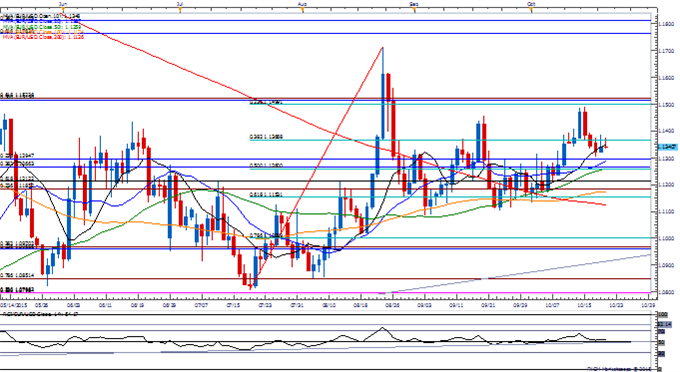 Even though the European Central Bank (ECB) stuck to its current policy in September, the Governing Council cut its growth and inflation forecast on the back of the weakening outlook for global growth accompanied by weak energy prices. As a result, President Mario Draghi continued to endorse a dovish outlook for monetary policy, with the central bank keeping the door open to further embark on its easing cycle. The cautious tone dragged on the Euro, with EUR/USD sliding below the 1.1200 handle to close the day at 1.1121.