- Core Rate of Inflation to Hold Steady at Annualized 1.8% for Fourth Consecutive Month.

Despite forecasts for a 0.1% contraction in the U.S. Consumer Price Index (CPI), stickiness in the core rate of inflation may keep the Fed on course to normalize monetary policy in 2015 as Chair Janet Yellen remains upbeat on the economy.

Stable price growth may heighten the appeal of the greenback as the Fed remains confident in achieving the 2% inflation target over the policy horizon, but signs of softening price pressures may spur additional headwinds for the greenback as market participants push back bets for a rate-hike.

Easing factor-gate prices accompanied by the slowdown in household consumption may encourage U.S. firms to offer discounted prices, and a dismal CPI print may prompt the Federal Open Market Committee (FOMC) to carry its zero-interest rate policy (ZIRP) into 2016 in an effort to curb the downside risks surrounding the real economy.

Nevertheless, improved confidence paired with the pickup in second-quarter GDP may generate stable price growth in the U.S. economy, and a positive development may spur a near-term recovery in the dollar as it boosts interest rate expectations. 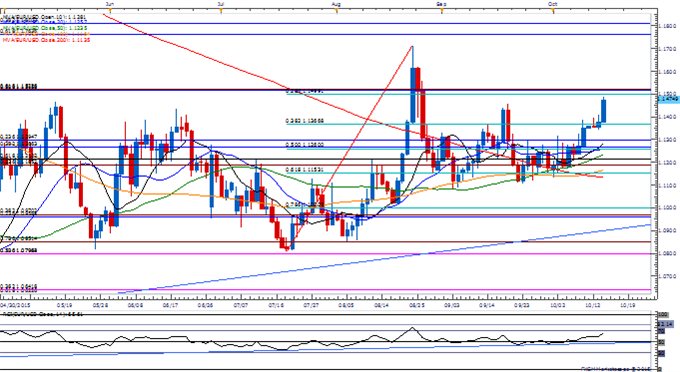 Price & Time: Make or Break Time For US Dollar

As expected, the U.S. Consumer Price Index (CPI) increased an annualized 0.2% in August, while the core rate of inflation held steady at 1.8% amid forecasts for a 1.9% print. A deeper look at the report showed costs for apparel increasing another 0.3% in August, with food and beverage costs increasing 0.2%, while transportation costs slipped 1.3% after holding flat during the previous month. The greenback struggled to hold its ground following the weaker-than-expected release, with EUR/USD climbing above the 1.1250 region to close the North American session at 1.1288.