- Household Spending Has Increased Four Out of Last Eight-Months.

Another 0.2% expansion in U.S. Retail Sales may boost the appeal of the greenback and spur a near-term pullback in EUR/USD as signs of a stronger recovery fuels expectations for a 2015 Fed rate hike.

The Federal Open Market Committee (FOMC) may stay on course to remove the zero-interest rate policy (ZIRP) later this year as Chair Janet Yellen remains upbeat on the U.S. economy, and a further expansion in private-sector consumption may encourage central bank officials to adopt a more hawkish outlook for monetary policy as it raises the outlook for growth and inflation.

Improved confidence accompanied by the marked recovery in the second-quarter may prop up household spending, and an upbeat sales report may spur a bullish reaction in the greenback as it boosts interest rate expectations.

In contrast, subdued wage growth paired with the rise in planned job-cuts may drag on consumption, and a dismal development may prompt the FOMC to retain its wait-and-see approach throughout the remainder of the year in an effort to encourage a stronger recovery. 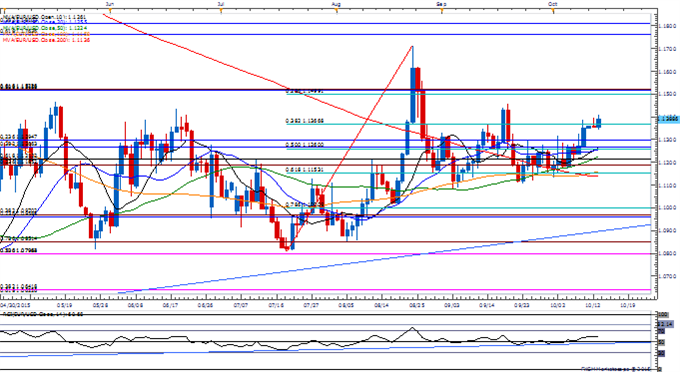 GBP/USD May Low Back in Focus as U.K. CPI Disappoints

U.S. Retail Sales increased 0.2% in July after expanding a revised 0.7% the month prior. In the same time, Retail Sales Ex Auto and Gas rises 0.3%, with the previous print largely revised up to 0.7% from 0.4%. A deeper look at the report showed a 0.7% rise in demand for motor vehicle and parts, which was accompanied by a 0.4% expansion in discretionary spending on clothing, while gasoline receipts slipped another 1.8% after contracting 0.6% in July. The greenback strengthened following the release, with EUR/USD slipping below the 1.1275 region and closing the day at 1.1265.

Trade Alongside the DailyFX Team on DailyFX on Demand.