- Core Rate of Inflation to Uptick to Annualized 1.1% in September.

Even though the headline reading for the U.K. Consumer Price Index (CPI) is projected to hold flat for the second consecutive month in September, an uptick in the core rate of inflation may generate a larger rebound in GBP/USD as its puts increased pressure on the Bank of England (BoE) to lift the benchmark interest rate off of the record-low.

Signs of a stronger recovery accompanied by increasing price pressures may spark a greater dissent within the Monetary Policy Committee (MPC) and push Governor Mark Carney to adopt a more hawkish outlook for monetary policy as it raises the risk of overshooting the 2% target for inflation.

Greater consumption paired with stronger wage growth may encourage a stronger-than-expected CPI print, and heightening price pressures may encourage the BoE to normalize monetary policy sooner rather than later as the central bank sees a ‘solid’ recovery ahead.

However, the underlying strength in the sterling along with the slowdown in private lending may weigh on price growth, and a dismal inflation report may generate a bearish reaction in the British Pound as it drags on interest rate expectations. 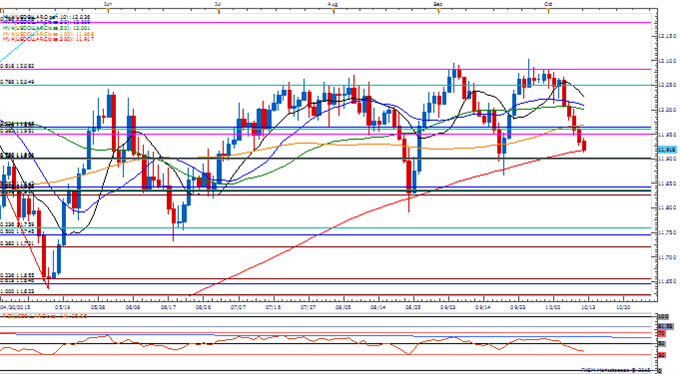 The U.K. Consumer Price Index (CPI) held flat in August after expanding an annualized 0.1% in July, while the core rate of inflation slowed to 1.0% from 1.2% in July. Even though Bank of England (BoE) Governor Mark Carney continues to prepare U.K. households and businesses for higher borrowing-costs, the disinflationary environment across the major industrialized economies may encourage the central bank to further delay its normalization cycle in an effort to encourage a stronger recovery. Despite the initial tick higher, the market reaction was short-lived, with GBP/USD losing ground throughout the North American trade to end the day at 1.5342.