Another 201K expansion in U.S. Non-Farm Payrolls (NFP) may fuel demand for the greenback and spur a near-term sell-off in EUR/USD should the fresh batch of data boost bets for a 2015 Fed rate hike.

Indeed, a further improvement in the labor market may spark a greater dissent at the Federal Open Market Committee’s (FOMC) October 28 interest rate decision, and the dollar may trade on a firmer footing over the coming days should the data heighten speculation for higher borrowing-costs.

The stronger-than-expected rebound in the second quarter accompanied by the expansion in building activity may encourage U.S. firms to increased their labor force, and a marked expansion in employment may put increased pressure on the FOMC to remove the zero-interest rate policy (ZIRP) as the economy approaches full-employment.

However, slowing production along with the rise in planned job-cuts may drag on job/wage growth, and a dismal NFP print may push the Fed to further delay its normalization cycle in an effort to further insulate the real economy. 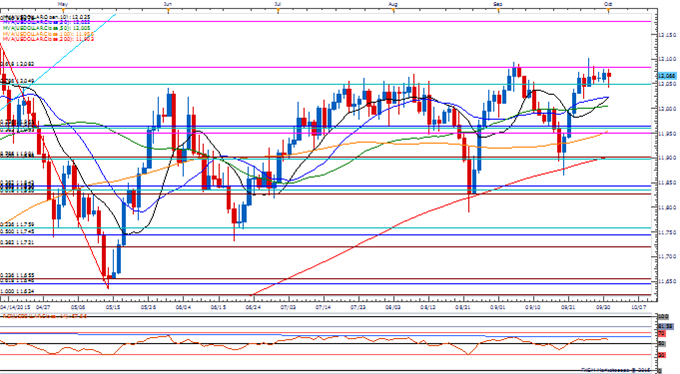 U.S. Non-Farm Payrolls(NFP) fell short of market expectations as the economy added 173K jobs in June following a revised 245K expansion the month prior. At the same time, the unemployment rate dropped to a seven-year low of 5.1% even as the participation rate held steady at an annualized 62.6% for the third month, while private wages also exceeded market forecasts as Average Hourly Earnings climbed 2.2% amid forecasts for a 2.1% print. Indeed, the ongoing improvement in the labor market accompanied by strong wage growth may keep the Fed on course to raise the benchmark interest rate later this year as the central bank sees the economy on a firmer footing. As a result, EUR/USD dipped below the 1.1100 handle following the data print, but the greenback struggled to hold its ground throughout the North American session, with EUR/USD closing the day at 1.1144.