- Employment Component Narrowed the Last Two-Months, With the Last Print Standing at 51.2.

A further slowdown in the ISM Manufacturing survey may dampen the appeal of the greenback and spur a short-term rebound in EUR/USD as it undermines expectations for a Fed rate hike later this year.

Even though Fed Chair Janet Yellen continues to endorse a 2015 liftoff, the ‘data dependent’ central bank may come under increased scrutiny to further delay its normalization cycle should the fundamental developments coming out of the U.S. economy cast a weakened outlook for growth and inflation.

U.S. firms may continue to scale back on production amid the ongoing weakness in private-consumption accompanied by the slowdown in global growth, and another downtick in the ISM survey may spur a bearish reaction in the greenback as it drags on interest rate expectations.

Nevertheless, the recent recovery in consumer confidence along with the stronger-than-expected recovery in the second-quarter may encourage firms to boost production, and a positive development may instill a more bullish outlook for the greenback as it fuels bets for a 2015 Fed rate hike. 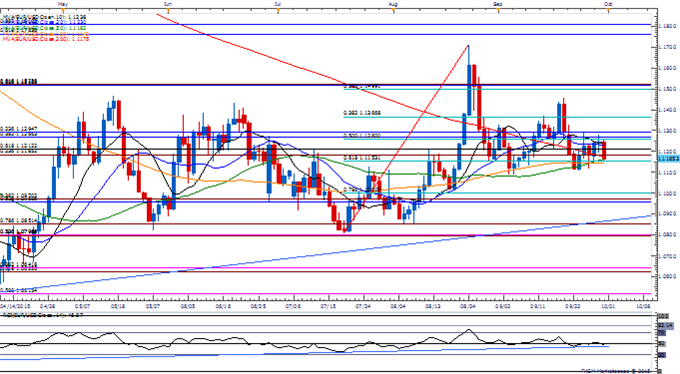 The U.S. ISM Manufacturing survey unexpectedly narrowed in August, with the figure slipping to a two-year low of 51.1 from 52.7 the month prior. A deeper look at the report showed a slowdown in New Orders and Production, with the Employment component narrowing for the second consecutive month, while New Export Orders contracted for the third month in August. Despite the weaker-than-expected print, it seems as though the Fed will stay on course to normalize monetary policy later this year as Chair Janet Yellen continues to see ‘transitory factors’ dragging on the economy. The greenback struggled to hold its ground following the dismal print, with EUR/USD climbing above the 1.1300 during the North American trade to end the day at 1.1313.