GBP/USD to Hold Above May Low on Upbeat U.K. Mortgage Applications

- A 69.8K Expansion Would Mark the Highest Reading Since February 2014.

A further expansion in U.K. Mortgage Approvals may boost the appeal of the British Pound and spark a near-term rebound in GBP/USD as signs of a stronger recovery puts increased pressure on the Bank of England (BoE) to normalize monetary policy sooner rather than later.

Despite the ongoing 8-1 split within the Monetary Policy Committee (MPC), data prints boosting the outlook for growth/inflation may spur a greater dissent at the October 8 policy meeting, and Governor Mark Carney may continue to prepare U.K. households and businesses for higher borrowing-costs as the economy gets on a more sustainable path.

The resilience in private consumption accompanied by the improvements in the labor markets may generate greater demand for home loans, and a marked pickup in household lending may encourage the BoE to adopt a more hawkish outlook as the central bank remains on course to normalize monetary policy.

However, the slowdown in building activity accompanied by the weakening outlook for global growth may drag on U.K. mortgage approvals, and a dismal development may produce a further decline in GBP/USD as it pushes out expectations for a BoE rate hike. 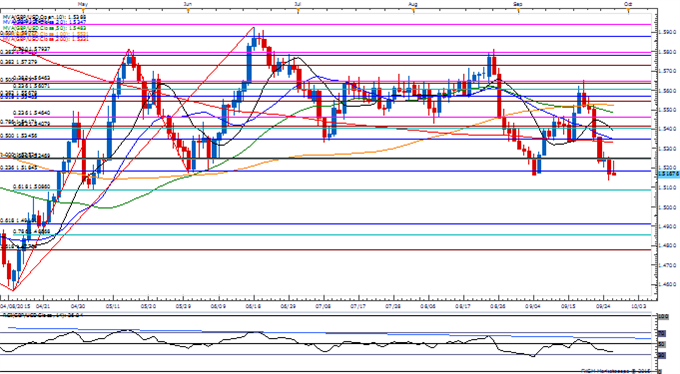 Impact that the U.K. Mortgage Approvals has had on GBP during the last release

U.K. Mortgage Approvals unexpectedly rose to an annualized 68.8K in Julyafter expanding a revised 67.1K the month prior to mark the highest reading since February 2014. The better-than-expected print may put increased pressure on the Bank of England (BoE) to switch gears over the coming months, but the slowdown in the global growth accompanied by the disinflationary environment across the major industrialized economies may keep the central bank on the sidelines throughout 2015 amid the 8-1 split within the committee. Despite the initial downtick in GBP/USD following the data print, the pair largely consolidated throughout the European trade to end the session at 1.5338.