A 2.3% decline in demand for U.S. Durable Goods accompanied by a weakening outlook for business investments may produce near-term headwinds for the greenback as it fuels speculation for a further delay in the Fed liftoff.

The Federal Open Market Committee (FOMC) may continue to endorse a wait-and-see approach at the October 28 interest rate decision as the central bank adopts a more cautious outlook for the region, and signs of a slower recovery may encourage Chair Janet Yellen to preserve the zero-interest rate policy (ZIRP) throughout 2015 in an effort to further insulate the real economy.

Waning confidence accompanied by the ongoing weakness in private-sector consumption may drag on orders for large-ticket items, and a dismal development may put increased pressure on the Fed to further delay the normalization cycle especially as the central bank scales back its outlook for growth and inflation.

On the other hand, the ongoing expansion in building and service-based activity may spur greater demand for durable goods, and a positive data print may keep the central bank on course to raise the benchmark interest rate in 2015 as Chair Yellen remains confident in achieving the Fed’s dual mandate for full-employment and price stability. 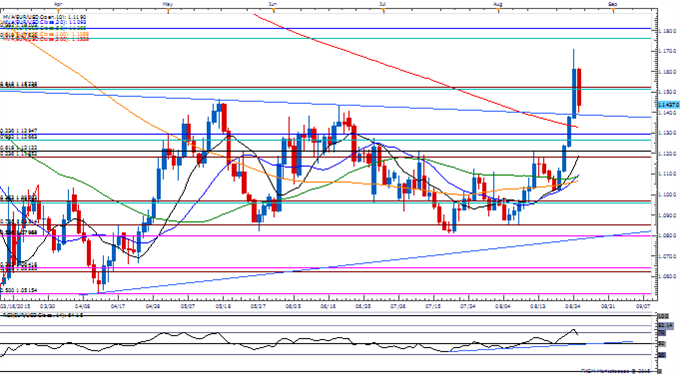 Macro Musings: Who Thought The Fed Would Raise Rates in 2015?

Impact that the U.S. Durable Goods report has had on EUR/USD during the last release

Orders for U.S. Durable Goods unexpectedly rose 2.0% in July after increasing a revised 4.1% the month prior. At the same time, Non-Defense Capital Goods Orders excluding Aircrafts showed, a proxy for future business investments, showed a faster rate of growth as the figure climbed another 2.2% following a 1.5% expansion in June. The better-than-estimated readings may keep the Fed on course to life the benchmark interest rate in 2015 especially as Chair Janet Yellen continues to anticipate a stronger recovery to emerge throughout the remainder of the year. The initial market reaction was limited and short-lived, with EUR/USD failing to push below the 1.1350 region, but the greenback strengthened in the latter-half of the North American trade to end the day at 1.1310.